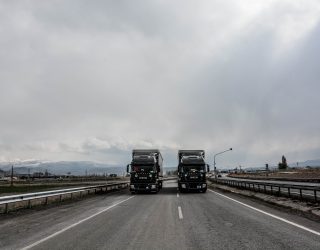 With a growing focus on how to decarbonise the UK’s trucks, Iveco has unveiled its plan to promote the benefits of using natural gas as a fuel.

The Iveco Ambassador programme will bring together business partners and customers who share the brand’s values and want to work in this area.

Iveco says that as a pioneer in natural gas technology, they want to highlight their commitment to protecting the environment.

The first ambassadors have now been chosen and are protecting the environment by running fleets of Iveco LNG and bio-LNG trucks.

Now, the truck maker says they will give their partners a voice to tell of their experiences of using natural gas in trucks and how their operations have benefited.

The programme is now up and running in those markets where natural gas is available including the UK, France and Italy.

Iveco has also unveiled its ‘Plant the Future’ project in a bid to reduce further its carbon use.

The firm has partnered with organisations dedicated to planting trees and they now want to create an international forest consisting of projects in various countries.

‘Natural gas has a key role to play’

Iveco’s head of alternative propulsion, Giandomenico Fioretti, said: “At Iveco, we believe that natural gas has a key role to play on the path to zero-carbon transport.

“In long-haulage, this alternative propulsion technology is the mature solution available today to reduce the environmental impact of the transport sector. This positive impact can be even stronger with biomethane.”

He added: “Today, biomethane accounts for 17% of natural gas used in transport. Its use is set to grow significantly in the coming years, as new fuelling stations come on stream and its benefits become better known.

“With initiatives such as the Iveco Ambassador programme we want to increase awareness of the advantages of biomethane for transporters.”

Iveco has been a pioneer in natural gas technology

For more than 20 years, Iveco has been a pioneer in natural gas technology as a sustainable fuel for trucks.

They have sold more than 45,000 natural gas vehicles to become Europe’s market leader.

The truck maker was also the first to offer a natural gas-powered heavy-duty truck that was designed for international long-haul missions.

The Iveco S-Way offers a best-in-class total cost of ownership and the LNG version can cover up to 1,000 miles.

There are currently around 4,000 fuelling stations for natural gas filling and Iveco says that this network can be used to distribute biomethane so no new investment in a dedicated infrastructure will be necessary.