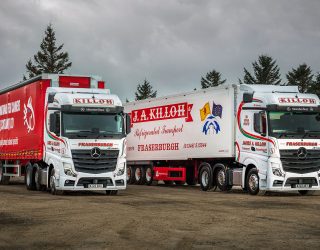 Scotland’s first premium-specification Mercedes Actros Ls have taken to the road in the colours of Fraserburgh-based operator JA Killoh.

The two 2546 tractor units are also the first new vehicles supplied by Aberdeen dealer BLS Truck & Van to a customer that has previously favoured pre-owned examples.

The Actros L sets new standards in the segment for long-distance haulage and heavy-duty distribution.

And, in addition to a full complement of well-proven Mercedes technology, the tractors come with a host of new features that deliver further improvements in efficiency, safety and comfort.

‘Used truck market is very strong at the moment’

Proprietor James Killoh said: “The used truck market is very strong at the moment, and this is reflected in some of the prices.

“These are still early days, but first impressions are certainly positive.

“The drivers tell me they’re really quiet and comfortable, while in terms of fuel consumption, the new trucks are already performing at the top end of our 9-9.5mpg fleet average. Obviously, I’m very happy with that.”

The Actros L badge now applies to all four- and six-wheeled tractor units with single or double drive axles, and 18- and 26-tonne rigid chassis, that have flat-floored GigaSpace, BigSpace – as chosen by JA Killoh – or Stream Space cabs in the wider (2.5m) of the two widths available.

Mr Killoh established his business in 1974 and initially ran tippers to support the development of North Sea gas terminals.

As time moved on, he moved into temperature-controlled and curtainside work.

Today, JA Killoh runs 20 tractor units from its head office and yard at Cairnsleed, on the outskirts of one of Europe’s largest fishing ports.

All but two of these trucks wear three-pointed stars – a near-total transformation from the situation four years ago, when another manufacturer could lay claim to the entire fleet.

The operator maintains its vehicles in-house but relies on the team at BLS Truck & Van for parts supplies and technical assistance.

The dealer has been serving Mercedes and FUSO truck customers in the north of Scotland since its appointment by the manufacturer in 2018.

Mr Killoh said: “We ran a lot of Mercedes trucks in the past, and they were always exceptionally reliable.

“Aftersales support was the issue, though. We moved away from the brand because the service in this part of the world wasn’t always up to standard.”

He added: “Things are definitely back in shape now. Since BLS Truck & Van took over, there’s been a marked improvement in performance.

“Any spares we need are always readily available and if ever we have an issue, we just give them a ring; they’re very helpful and will do whatever it takes to resolve the problem for us.”