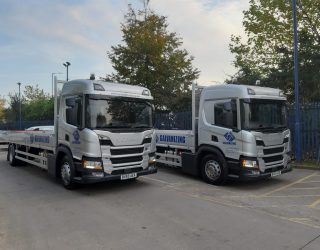 The steel business has introduced the technology having been impressed with the improvements it can bring to their operation in terms of safety, reducing downtime and added peace of mind.

In total, Joseph Ash will fit 102 systems onto 35 DAF and Scania trucks, as well as 72 trailers it uses to deliver products to a wide customer base across the UK.

‘First heard about Wheely-Safe a few years ago’

Gerry Green, Joseph Ash’s operations director, says: “We first heard about Wheely-Safe a few years ago, it seemed like a really interesting bit of kit.

“And when we sampled the latest generation of products first-hand, we were really impressed.”

He added: “Currently we are utilising the TPMS part of the technology, but in the future, we are keen to test the wheel security system too.

“It was really easy to install, and will help us to reduce costly breakdowns, spot tyre damage and defects early and prevent accidents, which can only be a good thing.”

Joseph Ash Galvanizing has specified Wheely-Safe’s external TPMS sensors which replace the normal valve caps on every tyre, and pair up to solar-powered receivers fitted in the cab.

The drivers are also utilising Wheely-Safe’s handy Pressure and Brake Temperature Checkers, as well as WalkAround Checkers for their daily inspections.

Wheely-Safe provided training to help explain installation and how to use the system correctly, with the business’s local tyre fitters also on site during the demonstrations to ensure they know how everything works.

Mr Green said: “It is still early days, but the drivers have already found the system very useful, with instant alerts allowing them to stop and deal with low tyre pressures immediately, whereas in the past it may have developed into something more serious.”

With eight plants in the UK, its customers range from large construction companies and fabricators to fencing and agricultural specifiers, government departments and metal sculpture artists.

Intelligent TPMS technology can ‘save fleets thousands of pounds’

The former chief executive of MAN Truck and Bus UK, Des Evans OBE has said that correct tyre management is important and that fleets should utilise the correct systems – such as the Wheely-Safe intelligent TPMS – to unlock huge savings.

He explained: “From my own experience, as little as 10-15% under inflation in your tyres will lead to an increase of 0.5 mpg in fuel, which equates roughly to 6% of your annual fuel bill.

“To put that in real terms, say your average 44-tonne 6×2 tractor unit covers 150,000 km per year, clocking around 9 mpg with the latest Euro 6 standard engine.

“That would mean your annual diesel consumption works out to around 10,400 gallons or roughly 47,280 litres. If the average fleet cost per litre of diesel (net of VAT) equals £1.10, your annual fuel cost per truck is roughly £52,000.”