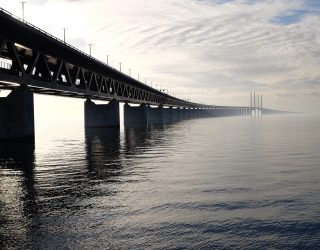 When Britain’s foreign secretary Boris Johnson said it was about time Britain and France were linked by a bridge, there was a collective eye roll. After all, we take everything Bozza says and does with a pinch of salt.

His idea to build an airport on an island in the Thames estuary? Talking about whiskey in a Sikh temple? Confusing Yemen and the Lebanon?

He has a long history of foot-in-the-mouth gaffes. But then Emmanuel Macron responded to the bridge idea by saying: “Let’s do it”.

Was the idea gaining momentum?

It isn’t the first time such a suggestion had been made. Back in 1981, transport officials submitted plans for a cross-Channel bridge link at a cost equivalent to €3 billion, although the proposal was turned down.

The media gave us an engineering perspective: a big project, but totally possible. OK, this might actually be a thing.

However, Johnson’s proposal was met with a chilly reception from the UK trucking industry. Surely a portion of the money would be better spent improving roads and building more lorry parks, argues Richard Burnett, chief executive of the Road Haulage Association.

“The Channel Tunnel and the ferry routes are working well within capacity, so it makes no sense to commit huge amounts of taxpayers’ money in an uncertain economic climate to a costly bridge project that we don’t need,” added Burnett.

Of course, we all know it’s a ridiculous idea and that the money could be much better spent on road infrastructure. But then again, imagine driving across the Channel and never having to queue to get on a train again…

What’s your view on Boris’ bridge?