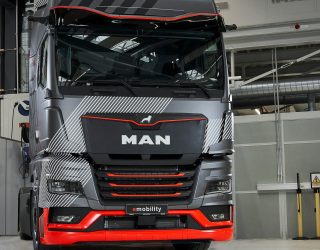 MAN Truck & Bus has revealed that it will begin production of heavy-duty eTrucks in Munich from the beginning of 2024 with the unveiling of its first electric truck.

The firm presented a near-production prototype of its new electric truck at an event in Nuremberg.

“We need to drive the electrification of our fleet even faster.”

Mr Vlaskamp added: “However, we will only succeed in ramping up e-mobility if we support our customers in their transition and convince them to do so.

“To this end, we are creating integrated digital solutions and charging offers.”

The manufacturer says it has invested heavily in research and development of battery-electric drives that will power their heavy eTrucks.

MAN says it had originally planned to launch its electric trucks in 2025 and believes that demand will grow over the coming years for battery-powered offerings.

They also want to increase the added value for battery-electric commercial vehicles and has set up an assembly process of battery packs for this purpose.

‘Cost of ownership for heavy electric and diesel trucks’

Mr Vlaskamp said: “Shortly before the middle of the decade, the total cost of ownership for heavy electric and diesel trucks will be the same in many European countries.

“In battery technology we expect big leaps – with ranges of up to 1,000 km in the next few years and charging times of well under an hour.

“This will finally make this type of drive suitable for long-distance transport and ready for the mass market.”

MAN began building its expertise in the assembly of battery packs in 2021 at their eMobility Technical Centre at the Nuremberg site.

It is here that the first battery packs for e-vehicle testing, and internal tests are being produced individually.

In addition, the development of charging infrastructure is crucial for the transformation of the transport industry, the firm says.

The Traton Group, the parent company of MAN Truck & Bus, will also contribute to this network by participating in the development of a high-performance charging network in Europe as part of a joint venture.

MAN also anticipates a growing demand for hydrogen-powered trucks in selected areas of application, such as heavy goods transport over long distances.

This is why the company is building up further expertise in the field of hydrogen technology, helped with financial support from the state of Bavaria.

The truck maker is part of a project to develop a fuel cell truck along with industry partners Bosch, Faurecia and ZF.

The first hydrogen-powered vehicles will be delivered to customers in the middle of 2024 to undertake ‘real-life’ testing.