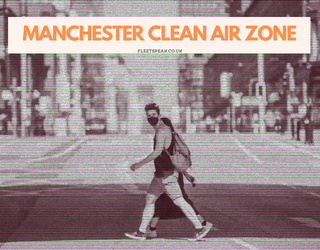 On February 4th (Friday), the UK government has officially granted permission to authorities to delay the execution of the Greater Manchester Clean Air Zone.

Since the Greater Manchester Clean Air Zone proposal was submitted in 2019, the local authorities, in consultation with local businesses & residents, were deemed responsible for the decision. However, considering the Covid-19 impact on supply chains, availability of vehicles for hire & prices, It seems more challenging for the people of Greater Manchester and overall CAZ emission standards to upgrade to cleaner vehicles resulting in the clean air zone failing to deliver compliance and clean air to legal limits by 2024.

The UK government has further considered Mayor’s proposal & further meetings in the discussion. The environment secretary has acknowledged a short delay in executing and implementing Manchester Clean Air Zone.

The time given will benefit from providing a piece of concrete evidence and a plan by July this year to achieve legal levels of NO2 speedily with no more delay than 2026.

While making the decision, the UK environment secretary has clarified their priority to attain the Government’s legal commitment to deliver compliance with NO2 as soon as possible.

Keeping the expectations at their peak, Greater Manchester will move at a stance to reduce air pollution and improve public health as its priority. Putting weight on the statement that the proposed CAZ is three times wider than London’s Ultra Low Emissions Zone, it’s a job to be done very carefully.

Air pollution has reduced significantly since 2010 – emissions of delicate particulate matter have fallen by 11%, while emissions of nitrogen oxides have been at their lowest level since records began.

UK Ministers and officials will carry out a further constructive plan to make Greater Manchester a cleaner, greener, and healthier city for everyone. Stay updated with us on the following revised plans regarding the Manchester Clean Air Zone on fleetSpeak.