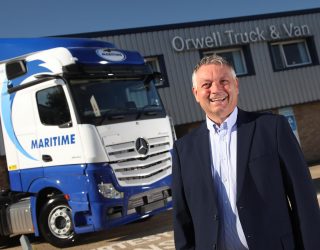 The final batch of 100 new-generation Mercedes-Benz Actros trucks is about to be delivered to Maritime Transport.

The leading logistics firm placed its order after a successful trial of a demonstration unit that proved incredibly popular with drivers and was fuel-efficient.

The trucks have been delivered by East Anglia-based dealer, Orwell Truck & Van.

The demonstrator unit was being evaluated by Wincanton Container Logistics when the firm was bought by Maritime last autumn.

Responsible for more than 1,200 trucks

Maritime’s fleet director Paul Heyhoe is responsible for more than 1,200 trucks – all but a handful of them are tractor units.

The firm’s fleet is split between three truck brands, including Mercedes-Benz.

He said: “We had found that with our 2016- and 17-registered Actros, the mpg returns started to improve after they’d been on the road for between a year and 18 months and continued doing so for a while.

“The demonstrator’s fuel performance, by contrast, was really good from the outset. We took the vehicle off day-time work and gave it to one of our long-distance trampers, then compared the figures with the 18-plate truck he’d been in previously.

“The demonstrator was a full mile per gallon better, and right up there with the very best on the fleet in terms of economy.”

These trucks are easily distinguishable from their predecessors as they have no mirrors.

Instead, the new tractor units came with Mercedes-Benz Trucks’ MirrorCam system which helps safety by providing improved rear vision and eliminating forward-facing blind spots, while also improving economy – Mercedes-Benz estimates by up to 1.5% – through reduced wind resistance from the compact and streamlined camera housings.

Other standard features include upgraded interactive versions of the stylish and intuitive Multimedia Cockpit, which replaces traditional switchgear; Active Brake Assist 5, the latest emergency braking aid, which now employs a camera as well as radar, and is even more responsive to pedestrians crossing the truck’s path; and enhanced Predictive Powertrain Control, which manages gear changes for optimum efficiency.

Mr Heyhoe said: “The drivers have taken quickly to MirrorCam and particularly like the new dashboard.”

Along with the satnav, drivers also like the electronic parking brake which was introduced last year and is now also a standard feature on new Actros and Arocs models.

The brake is applied automatically whenever the driver opens their door, and the vehicle is not moving.

Also key to Maritime Transport’s continued reliance on Mercedes-Benz trucks is the support it receives from Orwell Truck & Van, and its fellow members of the manufacturer’s franchised network.

Established in 2001, Maritime Transport has diversified over the years to provide complete supply chain coverage through a wide range of services, including curtain-sided distribution, intermodal transport, container storage and repair, freight management, and cargo handling and warehousing.