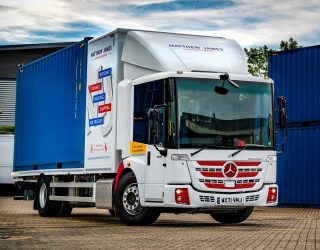 Global relocations specialist Matthew James has commissioned a low-entry Mercedes Econic with unrivalled direct visibility credentials that make it ideally suited to removals work in and around London.

The compliance-focused company, which operates from head offices in Dartford, Kent, and the Spanish resort of Malaga, purchased the latest addition to its fleet from established supplier, Rygor Commercials.

The 4×2 Econic boasts a deep, panoramic windscreen and as specified by Matthew James, has a fully glazed, folding passenger door. The vehicle attracts a maximum five-star rating from Transport for London’s Direct Vision Standard scheme.

As an 1830 L variant, the air-suspended chassis is powered by a 7.7-litre six-cylinder engine that produces 300 hp and is paired with a fully automatic six-speed Allison gearbox.

The firm runs a mixed-marque fleet of 40 trucks and 15 are Mercedes units, including five 26-tonne Actros LnR models with low frames and pantechnicon bodies, all of which arrived via Rygor Commercials.

Managing director Matthew de-Machen said: “We were quiet for a single month during the pandemic but this apart, there’s been no let-up in demand, as customers have adjusted their domestic arrangements in line with new working regimes and lifestyle aspirations.

“Our business is still booming and the Econic adds another important string to our bow.”

He added: “Investment in this vehicle reflects our strong commitments to compliance and to the safety, not only of colleagues but also of other, vulnerable road users.

“It’s easy to make a compelling business case for operation of the Econic in and around London.

“As well as leading the field in terms of direct visibility, its big, airy cab can accommodate a team of porters, which means we don’t have to send them out in a second vehicle.”

Preston-based SBR Specialist Coachbuilders fitted a large storage box immediately behind the cab and a platform incorporating twists locks, for securing the 20ft ISO shipping containers it is designed to carry.

Matthew James’ porters access the container via a ramp system while the cabin is easily accessed via a single step.

The Econic accommodates a driver and up to three passengers in air-conditioned comfort and safety.

The driver sits much lower than in a conventional truck and with the bus-style nearside door, allows them to make direct eye contact with vulnerable road users – particularly cyclists and pedestrians – at junctions and in traffic, a key advantage in helping each to understand the other’s intentions.

Econic has long been the refuse chassis of choice

The Mercedes Econic has long been the refuse chassis of choice for many local authorities and waste and recycling specialists.

However, the significantly enhanced visibility it affords drivers, together with its market-leading, factory-fit safety systems, means that over recent years the vehicle has also become increasingly attractive to safety-conscious companies working across other sectors, most notably construction and distribution.

The new truck is fitted with a 360-degree camera system by Hall’s Electrical and is one of the first Econics to be used in a removals application.