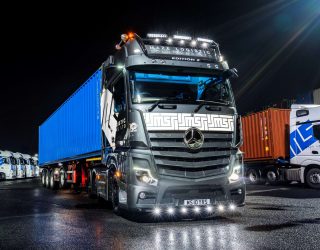 The Ipswich-based operator has relied on highly specified vehicles bearing the three-pointed star since it was established by Jimmy Simmonds and Steve Snelling in 2011.

Now the firm uses Actros tractor units with range topping GigaSpace cabs for all but nine of the 26 trucks in their fleet.

Maze Logistic Solutions took delivery of its new flagship at a handover ceremony during an open day event to mark the launch of Motus Truck & Van’s state-of-the-art aftersales centre in Witham, Essex.

One of the best-looking trucks on the road, the Mercedes Actros Edition 2 also showcases the manufacturer’s industry-leading efficiency and safety technology, while simultaneously elevating driver appeal to a new level.

Just 400 Actros Edition 2s have been built for customers worldwide, and only a handful have reached the UK.

The truck is easily recognisable thanks to its Moonstone Grey grille and sun visor which incorporates four additional LED headlights, and a deep black panel with EDITION 2 lettering.

Maze Logistic Solutions’ truck is further enhanced by side skirts

The appearance of Maze Logistic Solutions’ truck is further enhanced by side skirts, paintwork with colour-coded bumpers in the same Moonstone Grey, and two sets of Lightfix light bars supplied and fitted by Kuda Automotive.

It also wears an unusual, high-impact livery – applied by Chapple Signs, of Stowmarket – which incorporates black reflective elements that become photo-luminescent in the dark.

Maze Logistic Solutions director, Ryan Jiggens, said: “The Actros is a great looking truck, and equipped to a very high standard both outside and in.

He added: “Against this backdrop, when we decided to commission a new fleet flagship to mark our 10th anniversary a Mercedes was the obvious choice.

“To my mind, the Edition 2 represents the very best of the best – ours look amazing and will be a great marketing tool.”

The Actros 2 driver is Robert Chamberlain’s and his cab is every bit as eye-catching on the inside with an abundance of stitched black Nappa leather contrasts with dashboard components in carbon.

There is a sliding and tilting sunroof, eight colours of ambient lighting, and a driver’s suspension seat that incorporates climate and massage functions.

A rear wall locker system, complete with a microwave and flat screen TV further enhances Robert’s living experience, while a brushed and polished aluminium badge on the co-driver’s side hails this Edition 2 as ‘One of 400’.

Mr Jiggens said: “Robert is very happy with the truck. He is an excellent employee and driver, and as with so many of his colleagues continues to support our growing business with regular enhancement suggestions for the fleet.

“As an avid truck enthusiast, he looks forward to presenting the Maze Edition 2 at shows next year.”