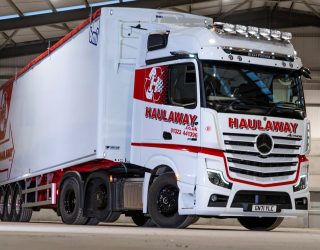 Long-standing Mercedes operator Haulaway has brought down the curtain on its 30th anniversary celebrations with a stunning, limited edition Actros Edition 2 tractor unit.

The East Sussex-based operator provides a comprehensive portfolio of waste management services to trade and domestic customers with its fleet of 22 skip-loaders, tippers, tipper-grabs and tractors that is dominated by the three-pointed star.

The latest addition arrived via dealer Sparshatt Truck & Van and the Edition 2 is a dazzling showcase for the fifth-generation Actros.

However, just 400 have been built for customers worldwide, and of these, only a small handful have reached the UK.

He said: “The new generation of Mercedes trucks are very modern and refreshing in their appearance, and popular with our drivers too.

“They appreciate the comfort and cab layouts – the twin screens of the multimedia cockpit provide clear visibility on all of the vehicle’s parameters, while MirrorCam makes a real contribution to enhanced safety, not least by eliminating some big blind spots.

“The Edition 2 really stands out from the rest, though. We’ve bought in excess of 200 vehicles from Mercedes over the last three decades.

“I’m immensely proud, therefore, that we’ve been able to mark our anniversary by investing in one that not only looks fantastic but also represents the cutting-edge in terms of truck technology.”

Haulaway’s new flagship has a flat-floored BigSpace cab and, as a 2563 variant, is powered by a range-topping 625 hp, 15.6-litre in-line six-cylinder engine.

It is finished in Arctic White paint with colour-coded bumpers and red decals, while the black gloss wheels have silver Mercedes stars on their hubs.

External features that mark this out as a truck like no other include a sun visor incorporating four LED headlights, above which is a deep black panel with EDITION 2 lettering, an illuminated three-pointed star in dark chrome with a black closed cover, and self-cleaning Bi-xenon headlamps. Three more LED headlights behind the cab, a chassis frame cover and LED taillights.

Accessed via stainless steel steps, the Edition 2’s cab interior is every bit as eye-catching inside as its exterior.

There’s an abundance of stitched black Nappa leather that contrasts with dashboard components in carbon.

Cabin has a sliding and tilting sunroof

The cabin also has a sliding and tilting sunroof, eight colours of ambient lighting, and a driver’s suspension seat that incorporates climate and massage functions, while at 900mm-wide and with its own, cosy topper, the comfort mattress is a dream for any driver.

A brushed and polished aluminium badge on the co-driver’s side hails the Edition 2 as ‘One of 400’.

The truck also comes with a full complement of high-tech aids for increased safety, efficiency and comfort including MirrorCam.

The tractor also has the latest version of Predictive Powertrain Control, which manages gear changes to optimise fuel economy, and Active Brake Assist 5, the emergency braking system that outperforms its rivals, particularly in its responses to pedestrians stepping into the vehicle’s path.