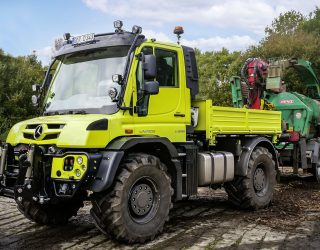 The Mercedes Unimog has seen its power being boosted after customer feedback.

The U435 and U535 now produce 354 hp – an increase of 54 hp on the highest output previously available from the Euro VI Step E 7.7-litre in-line six-cylinder engine.

Daimler Truck engineers have also designed and built an automated manual transmission to manage the higher outputs of the U435/U535.

As a result, it is expected to prove popular with UK operators as an alternative to the standard-fit manual gearbox.

Ross Paterson, the head of special trucks, said: “Mercedes Trucks is committed to the continuous improvement of its range.

“This, of course, applies every bit as much to the Unimog – a vehicle first seen in 1946 and that now enjoys legendary status – as it does to other, more mainstream products.”

He added: “Many of the innovations and developments we’ve introduced have been in direct response to feedback from those who buy and operate our vehicles.

“We listen to what they tell us, and wherever possible we deliver what they need.

“That’s certainly been the case where the U435 and U535 are concerned. Farmers and arboriculturists wanted that little bit more power and torque at the wheels for in-field operations, as well as for trailer work.”

In other developments, the Unimog implement carrier can now be specified for the first time with self-levelling suspension for the rear axle.

This new set-up, which employs gas storage tanks and hydraulic cylinders, instead of the usual coil springs, delivers better comfort and operational efficiency.

As well as providing a constant driving level irrespective of load status or any rear attachments that may be fitted, the hydropneumatic system contributes to handling stability and assists operators when coupling and uncoupling implements.

A new Comfort steering option, meanwhile, makes it easier for drivers to turn the wheel at low, manoeuvring speeds, or when stationary, and is particularly helpful when the vehicle is fitted with large-volume tyres or heavy front implements such as mowers.

The electrohydraulic steering delivers a ‘feel’ that adapts to the driving situation.

The U435 and U535 have maximum gross weights of 14 tonnes and 16.5 tonnes respectively, and the first examples are expected to reach the UK in January.

The latest round of product enhancements caps a memorable 75th anniversary year for the Mercedes Unimog.

Although it offers many of the attributes of both, this unique vehicle is neither a truck, nor a tractor and it enjoys an unrivalled reputation as the ultimate off-roader, but also achieves impressive on-road speeds of up to 56 mph.

Unimogs are chosen for the most arduous applications by a broad spectrum of operators, particularly those engaged in the agriculture and arboriculture, utilities, municipal and emergency services sectors.

They are also engaged in highly specialised roles such as railway infrastructure maintenance – the vehicle can even be adapted to run on rails.