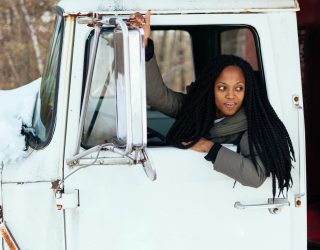 We all know what the stereotypical truck driver looks like, but as more women get behind the wheel, it’s time our perceptions changed.

When the Army and Air Force Exchange Service in Germany were looking to hire a new driver one applicant stood out from the rest. Not because she was female, but because she absolutely aced the road test.

“Some of the other applicants took several attempts while she only took one. We could tell she was very skilled,” said Ronald Willis, regional supervisor for the Exchange’s Europe fleet.

With 18 years’ experience of long distance driving, Heike Motler is the first woman hired to drive long distance in the Exchange’s Europe fleet. Hers was also the first application the company had received from a woman in more than five years.

We are seeing a similar story elsewhere as more women get behind the wheel and smash the beefy male trucker stereotype.

Some want to bring a bit of glamour to the industry. Blaze Williams, the self-styled ‘hottest trucker in the world’ is one of three female truckers on her team of 19 in Western Australia.

While UK-based trucker Gina McGoldrick is determined to make her cab as girly as possible. “If any of the boys have to drive this lorry they’re mortified because it’s all pink, everywhere,” she jokes.

There are signs that the number of female truckers is starting to rise. And some of these women aren’t content to just make a living behind the wheel, they also spend their spare time at truck festivals competing for prizes and raising money for charity.

Talking of money… The gender pay gap is big news right now, with larger companies being forced to be more transparent about what they pay their staff. This has revealed big differences between how much some men are paid compared to their female counterparts.

Not so much in trucking. The trucking industry has proven it is far ahead of the rest, underpaying employees regardless of gender. Yup, both men and women get paid far below what they should.

So is the reason why there are so few women in the industry? Perhaps women have realised that they would get better wages on a supermarket checkout (and better hours) than driving a big rig?

With the truck driver shortage such a huge concern for the industry, it’s up to haulage companies to think about the pay, hours, conditions, and benefits they offer drivers.

There’s still some way to go. Women truck drivers often comment on the number of heads they turn when in the cab. And let’s just ignore the comments they hear about not being able to reverse.