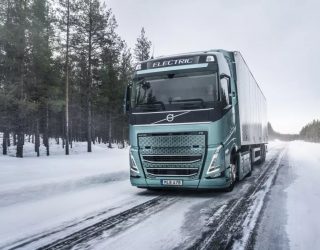 That’s down to the fast response of the electric motors, the force generated between the wheels and the road can now be controlled instantly to proactively prevent wheel spin.

The feature improves acceleration in slippery conditions and in tests performed with the Volvo FH Electric on a low friction surface with a loaded trailer, there was a ​45% improvement at full acceleration.

‘Improvement when going up a slippery or gravel road’

“I believe this will increase productivity, not least for our construction customers.”

Volvo says that if a truck starts to skid, multiple sensors allow the vehicle’s control system to react to the road surface conditions and utilise the vehicle’s electric motors, along with other actuators, in an intelligent way to help the driver stay on the road.

The new feature is also designed to reduce the risk for jack-knifing ​and oversteering when driving unloaded.

Ms Wrige Berling added: “With Active Grip Control we are giving our drivers further improved ability to traverse difficult roads and terrain – even during the most challenging of conditions.

“This is a unique function that Volvo Group has protected by patents.”

Improvements can also be seen when braking, as the function can be used for controlled regenerative braking without going into ABS.

This increases efficiency since more time is spent in regeneration, allowing for a smoother braking experience.​

The Active Grip Control feature will be available on the heavy-duty Volvo FH, Volvo FM and Volvo FMX Electric trucks, that are used for regional haul and construction operations.

A version of the feature will also be available on trucks with a diesel or LNG driveline.

Meanwhile, Volvo Trucks has launched an enhanced version of its Volvo VNR Electric in North America with up to 85% increased range and faster charging.

The VNR Electric is one of six all-electric heavy Volvo truck models and is specially designed for the North American market.

The first generation of VNR Electric had an operating range of up to 150 miles and now an enhanced version of the class 8* electric truck has been launched, with an operational range of up to 275 miles.

The improved performance is due to, among other things, improved battery design and a new six battery package option.

Peter Voorhoeve, the president of Volvo Trucks North America, said: “It is a testament to Volvo Trucks’ leadership in a continuously evolving industry that we are bringing the enhanced version of our VNR Electric to the market only a year after sales of the VNR Electric first started.”