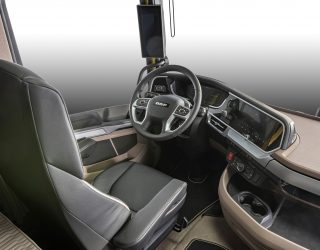 Two weeks after its high-profile European launch, a surge of customers in the UK are already placing orders for the DAF XF, XG and XG+ trucks.

DAF say they are delighted with the response from truck operators and with the number of orders for their new vehicles.

The New Generation DAF trucks will begin production later this year in Leyland and Eindhoven with some of the new units being delivered to meet UK customer orders.

The marketing manager at DAF trucks, Phil Moon, said: “It has been a hugely encouraging response.

“We have a daily sales tracker and orders are coming in at an impressive rate. We delivered a fantastic launch event, and the follow-up sales effort is now in full-swing – operators are obviously very keen to get their hands on the New Generation DAF.”

The first DAF trucks customer out of the blocks was Scottish haulier Derek Heeps.

The firm has ordered the range-topping XG+ 530 FT 4×2 tractor with Glasgow’s Motus Commercials.

The haulier says that the truck will be followed with another order for four XG 530 FTG 6×2 tractors.

The haulage firm is also exploiting the truck’s improved safety and vision credentials and will use the digital vision system instead of conventional exterior mirrors.

They are also signing up for a kerb-view window for the co-driver’s door, and ‘city turn assist’.

Wayne Catt Transport, JPL Haulage and Leckwith Group have each placed an order for an XG+ 530 FTS tractor from Lancashire DAF.

And ABH Mansfield has ordered a DAF XG+530 FTP from Motus Commercials in Derby.

There’s no doubt that the XF has been hugely popular since it was launched in 1997 and DAF has sold more than 650,000 units in 50 countries.

Along the way, the DAF range has picked up various ‘International Truck of the Year’ awards and the new model features a brand-new cab design – and delivers the lowest CO2 emissions yet.

The new DAF trucks range has undertaken 20 million km of durability testing on roads to ensure they meet the exacting standards of their customers.

DAF says that the new range delivers the next level for truck design luxury and they are more than 10% fuel-efficient than their predecessor.

Among the improvements is a more spacious cab since the roof height has been increased to 2,220 mm and the range topper’s cab size is a useful 12.5 m³.