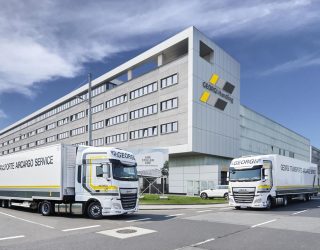 PPFS was launched ten years ago and offers international operators pan-European contracts for parts supply and services at DAF Dealers.

The firm’s director of fleet sales, Floris van Wijk, said: “The programme relieves companies of any burden involved in purchasing parts and maintenance throughout Europe.

“We guarantee uniform prices for parts at all participating DAF dealers, and we simplify company administrative processes with collective invoices for the maintenance of the entire fleet, wherever in Europe that maintenance is carried out.

GEORGI Transporte specialises in air freight and uses dedicated roller bed trailers to connect customers to all major cargo airports through its European network and guarantees the fastest delivery time.

The company, with its home base at Frankfurt Airport, started with two trucks in 1953 and now operates more than 400 vehicles, nearly half of which are DAF trucks, along with 450 semi-trailers.

They now employ 950 people at nine offices across Europe and is now looking at growing its transport offering.

The head of Truckfleet at GEORGI Transporte, Hubert Hohl, said: “PPFS enables us to further increase our efficiency.

“With many locations and trucks located all over Europe, it is great to have a single point of contact for the purchase of parts in each country where we operate.”

He added: “This also has a major benefit in terms of administration – instead of handling separate invoices from all of the dealer locations where we previously bought parts, we now receive one central invoice.”

DAF has once again offered a free cuppa to truck drivers

Meanwhile, DAF has once again teamed up with some of the UK’s best-known truckstops to offer a free cuppa – plus a mince pie – to truck drivers in the run-up to Christmas.

Drivers of all truck types were able to claim a free hot drink and the offer was promoted through DAF Trucks’ social media channels, flyers and digital advertising at participating locations.

This is the third year of the cuppa giveaway and the positive response from drivers and truckstops during the previous free cuppa giveaways has encouraged DAF Trucks to offer its support once more.

“This was a chance for DAF Trucks to say thank you to the many thousands of drivers who continue to go above and beyond – especially at Christmas time.”