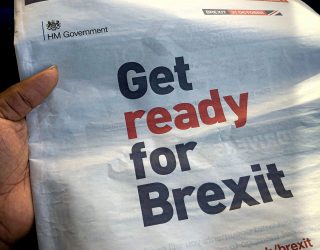 The UK government is planning to build up to 29 new lorry parks across the UK as a way to deal with the additional border checks required after Brexit.

Boris Johnson’s government has changed the law giving itself the authority to grant emergency planning permission for these sites.

At the end of this year, Britain will leave the EU’s single market and customs union which means truck drivers will need to fill out customs declarations before crossing the border.

The UK government realises it could take some trucking companies several weeks to adapt to the new checks. It predicts some truck drivers won’t have the right paperwork in place before attempting to cross the channel into the EU.

To minimise disruption and to avoid long queues and chaos at the border, the plan is to build several lorry parks across the UK, where any drivers who do not have the correct paperwork can be held.

Work is already underway on a lorry park in Kent, 25 miles down the road from Dover. Other sites being considered include Liverpool, Salford, Hull, Portsmouth and Dover itself.

The UK is bracing itself for a host of new checks and barriers with the EU once the Brexit transition period comes to an end. The EU is its biggest trading partner and whether or not a new free trade agreement is in place, the impact is going to hit haulage companies hard.

Logistics companies are growing increasingly concerned that the UK’s borders will not be ready in time.

In a series of leaked documents, we’ve learned that government officials are worried about ‘critical gaps’ in plans – particularly the IT systems required. And that UK Trade Secretary Liz Truss is concerned that import checks will not be able to be carried out properly.

There seems to be a theme in Downing Street these days…