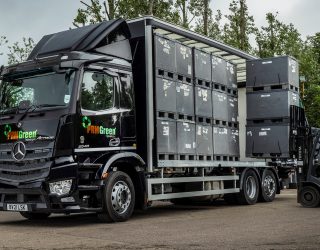 When PRM Green Technologies needed a second truck with a low frame height to stay ahead of growing customer demand, they had no hesitation in choosing another eye-catching Mercedes-Benz Actros.

The company has its headquarters in Cannock, Staffordshire, and provides specialised IT equipment recycling and secure data destruction services for customers from the commercial and public sectors.

Like its three-year-old predecessor, the new vehicle with its 26-tonne chassis was supplied by dealer Midlands Truck and Van and, once again, PRM chose a 2540 LnR model with ClassicSpace L-cab, 10.7-litre in-line six-cylinder engine producing 394 hp, and single-tyred trailing axle.

And as before, the curtainside body is by West Bromwich-based Fred Smith & Sons, while the six-wheeler is finished in PRM Green Technologies’ striking livery.

The black paintwork – which extends to the colour-coded bumper – was applied at the Mercedes-Benz factory.

Unlike its established stablemate, however, the new truck is from the fifth-generation Actros range introduced to the UK market in the autumn of 2019.

Though it does not have conventional mirrors and instead, the truck is equipped with MirrorCam, the revolutionary camera-based system that offers improved rear visibility while eliminating forward-facing blind spots caused by mirror housings.

PRM Green Technologies adheres to the WEEE Directive governing the disposal of ‘Waste Electrical and Electronic Equipment’ and takes pride in its industry-leading environmental practices, as well as the strict security procedures that protect data confidentiality.

The company relies on a fleet of vans and 7.5-tonne trucks to collect redundant IT equipment from customer premises and return it either to Cannock or to one of its three bases, in Alton, Hampshire, Carlisle and Taunton.

A third-party carrier was previously responsible for transporting consignments from those bases to its headquarters for processing.

However, the company acquired its first Actros when the financial case for taking this function in-house became compelling and continued growth has prompted the investment in a second truck.

Actros has an overall height of 4.2 metres

The new Actros has an overall height of 4.2 metres but thanks to its low frame a loading aperture that is just under 2.75m high.

As a result, it is able to carry no fewer than 60 of the Euro containers used by PRM Green Technologies. Stacked in three decks, each container is 800mm-high and has a volume capacity of more than 500 litres.

Tim Hawkins, who founded PRM Green Technologies with co-director Paul Mullett in 2009, said: “When we started out on this road three years ago, we invited quotations from all of the major manufacturers.

“Midlands Truck and Van was the best response. It was able to offer the low-height chassis that gave us the headroom we needed, while the finance rates were also very attractive. We thought Mercedes-Benz would be the most expensive, but because the residual value on the vehicle was so high the opposite was true.”

PRM Green Technologies’ Actros drivers also have occasional nights away in their trucks, so the fact that the ClassicSpace L-cab comes with a fold-down bed is an advantage.

The firm chose the upgraded Multimedia Cockpit interactive version, which comes with a larger, 12.0-inch instrument panel and extra functionality, including satellite navigation.