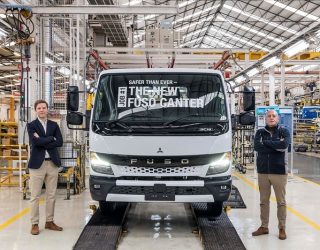 Production of the latest generation FUSO Canter has begun in Europe.

Starting this month, the light-duty truck will be rolling off the production line in Tramagal, Portugal.

Fuso is a subsidiary of Daimler Truck, and the latest generation marks the next milestone in the success story of the Canter.

The new model comes with an eye-catching redesigned cabin, as well as improvements in safety and comfort.

The new FUSO Canter has been available through the FUSO retail network across Europe since August.

FUSO’s head of sales, Philipp Panter, said: “For many decades, the FUSO Canter has been an international best-seller in the light-duty truck segment due to its class leading turning circle, payload and excellent versatility.

“Since its market launch in 1963, over 4.5 million FUSO Canters have been produced worldwide.

“With the start of production, we look forward to offering our European customers a major upgrade in safety, comfort and a new modern cabin design.”

FUSO Canter has been developed in Japan

The FUSO Canter has been developed in Japan and is being built in Europe with most of its parts coming from more than 90 European suppliers, such as the engine, axle components, springs, brakes, tyres, headlamps and lights, as well as seats and extensive interior panelling.

FUSO mainly contributes tool-intensive parts for the cabin and frame from Japan, as well as axle parts, steering wheel, the heating and air conditioning systems, as well as the innovative Duonic dual-clutch transmission.

The President and chief executive of Mitsubishi Fuso Truck Europe, Jorge Rosa, said: “The start of production marks a proud moment for all of us here at the European FUSO plant in Tramagal.

“Since 1980 we have produced almost 240,000 FUSO trucks and now the new FUSO Canter will add to this legacy, rolling off the production line and as always reliably meeting the demanding quality standards of FUSO and Daimler Truck.”

Meanwhile, Daimler Truck has revealed that 300 versions of the all-electric, light-duty truck FUSO eCanter have been delivered.

Customers in 16 countries and cities such as New York, Tokyo, Berlin, London and Amsterdam are now enjoying the reliable urban delivery truck.

The FUSO eCanter provides a 60-mile range with a single charge, making the 7,49t vehicle perfectly suited for zero-emission and quiet inner-city distribution.

As of November, more than 40 vehicles have been delivered in the United States, 75 trucks in Japan and another 190+ FUSO eCanter trucks were delivered in Europe.

Earlier this year, the all-electric light-duty truck was introduced to Australia and New Zealand, expanding the vehicle’s success story and adding two more major FUSO markets to the roster.