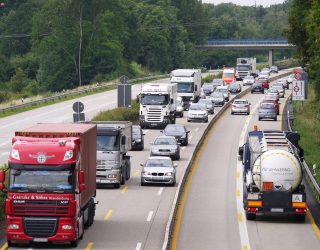 A call by hauliers to relax immigration rules for EU lorry drivers will not help resolve the shortage of truck drivers in the UK, a union has warned.

Unite says that granting temporary work visas to European lorry drivers will be nothing more than a ‘sticking plaster’.

Instead, the union says that hauliers need to boost the pay rates for drivers to resolve the crisis.

Union says it is responding to recent reports that the government is considering employer calls to change immigration rules that would make it easier to recruit EU lorry drivers.

There is estimated to be a shortage of nearly 75,000 truck drivers in the country.

Now Unite, which represents thousands of truck drivers, says that now is the time to resolve issues that make lorry driving unattractive to many new entrants – and is leading existing drivers to leave the sector.

They say the primary issue is low pay for drivers, along with inferior welfare facilities and poor working conditions.

And the union says that if a short-term fix is allowed and European drivers are recruited, then safeguards will need to be put in place to prevent any workers from being exploited.

Truck drivers must be employed by hauliers

They say that any truck drivers recruited must not be employed by employment agencies but directly employed by hauliers.

They should also be recruited on contracts that have a decent duration, and on pay rates that are in line with existing workers.

They should also not be forced to pay large fees for travel or accommodation.

“At best it is a sticking plaster, and at worst there is a danger it could make a bad situation worse.”

He added: “Workers are voting with their feet and leaving the profession due to low pay. If employers think they can bring in drivers from Europe to suppress wages this will only make the problem worse.

“Lorry driving is a highly skilled, stressful and demanding profession. Unless workers are properly paid then they are not going to be willing to undertake this work.

“If the government does allow companies to recruit lorry drivers this must be contingent on them following strict rules to ensure that workers are not exploited as cheap labour.”

Calls made in Parliament for the army to be used

The warning from Unite comes after calls were made in Parliament for the army to be used to distribute goods to supermarkets.

MPs heard that industry leaders are warning of food shortages because of an ‘unimaginable collapse’ in the country’s supply chains because of the shortage of HGV drivers to carry out deliveries.