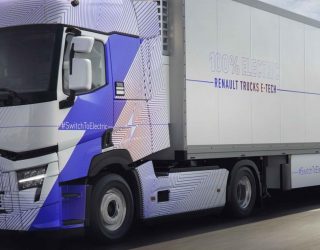 Renault Trucks is expanding its all-electric range with two new models of up to 44 tonnes, the T E-Tech for regional transport, and the C E-Tech for the construction industry.

The trucks will go on sale next year.

The new models in the firm’s heavy-duty range will be fitted with two or three electric motors to provide a combined power of up to 666 hp. They will be also equipped with an Optidriver gearbox.

The Renault Trucks T and C E-Tech will have two to six lithium-ion battery packs with a capacity of 180 to 540 kWh.

The batteries for the new Renault electric trucks can be fully charged in 9.5 hours by alternating current (AC) up to 43 kW, or in 2.5 hours by direct current (DC) up to 250 kW.

The trucks will be able to travel up to 190 miles on a single charge, and up to 310 miles with a one-hour intermediate fast charge.

And, for that easy adaptation to any type of bodywork and consequently to any type of use, the Renault Trucks T and C E-Tech can be equipped with three types of power take-off (PTO): electric, electromechanical or on the gearbox.

Electric trucks will have a gross vehicle weight of 44 tonnes

With a full electric range that now extends from 3.1 to 44 tonnes and a 360° customer support offering, Renault Trucks is stepping up its strategy and setting its sights higher: the manufacturer says it intends to sell 50% of its vehicles in electric form by 2030.

Meanwhile, Renault Trucks has unveiled new ambitions in the field of electric mobility, with an offer geared towards providing 360° support for its customers, renamed E-Tech.

For several years now, Renault has been offering a steadily expanding range of electric trucks and its sales volumes reflect this rapid progress: in 2021, 249 electric trucks were delivered and 613 were ordered.

Renault is now stepping up its strategy and increasing its ambitions.

To support these ambitions, Renault Trucks is rolling out an offer designed to provide comprehensive support for hauliers in their transition to carbon neutrality.

This new electric offering focuses on 360° support for customers, is set to replace the current offer of Z.E. electric trucks.