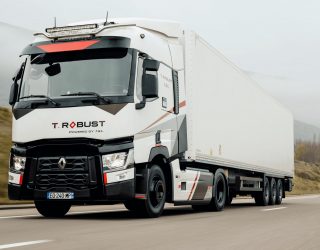 Renault Trucks has unveiled its new special used edition, the T Robust 13L, with a focus on robustness.

The truck has been revamped by the manufacturer’s design teams with a dynamic and racy style with services tailored to its recognised longevity.

Renault says that with a global shortage of truck drivers, hauliers are paying more attention to the design of their trucks to attract and retain drivers.

And, they add, the success of Renault Trucks’ special second-hand series, the T 01 Racing, is proof of this and they are now launching a new special, used series with a unique design: the T Robust 13L.

The truck has an interior and exterior that reflects the vehicle’s robustness and the truck maker’s expertise in producing 13.0-litre engines.

Its visual identity embodies the heritage of the brand, its longevity and the robustness of its trucks.

Renault Trucks’ designers have chosen to use grey, black and red, the manufacturer’s characteristic colours, and to work around the iconic diamond shape.

On the bodywork, vibrant lines express the strength and longevity of the 13-litre engine, as well as the experience of Renault Trucks.

Red detailing has been added under the headlamps and on the step, while red nut covers showcase the truck’s parts in movement, reflecting its robustness and the strength of its engine.

‘T Robust 13L’ have been affixed to the grille and doors

The words ‘T Robust 13L’ have been affixed to the grille and doors and the firm has chosen a thick, mechanical typography, reminiscent of the industrial, sporting world.

A plaque with the words ‘T Robust 13L’ has been fitted above the bunk to be visible from the outside.

The tone is set as soon as the door opens and, at eye level, on the side of the seat, there is a label bearing the name of the special series.

The interior of the door, in the shape of a boomerang, has also been reworked with a carbon finish and special marking.

Dashboard has been redesigned and varnished

The carbon trim on the dashboard has been redesigned and varnished, featuring new triangular shapes and lines that echo the sleek design of the bodywork.

The seats have been covered with breathable 3D mesh covers embroidered with the name of the special series and floor mats with ‘T Robust 13L’ branding have been added. As with the exterior, elegant touches of red have been added, including on the storage handles.

This new, special used edition is equipped with a DTI 13, Euro VI step D engine, known for its reliability, power and torque performance. This engine is extremely robust and is designed to exceed one million kilometres.

The T Robust 13L is based on a recent used truck, selected, prepared and transformed by the experts at Renault Trucks’ Used Trucks Centre.

The most delicate operations, such as painting, are carried out in the Used Trucks Factory, the manufacturer’s used trucks conversion and adaptation unit located within its manufacturing site.