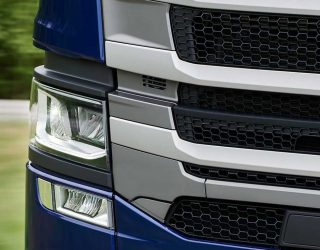 In a bid to help customers plan ahead, Scania has revealed plans to introduce a ‘substantially’ updated Euro 6 compliant truck range – which will include a new 13-litre powertrain.

The covers will be taken off in November and the news follows record truck sales for Scania in the first quarter of this year.

The executive vice president and head of sales, Alexander Vlaskamp, said: “Given the situation with record demand, semiconductor shortages and the coming introduction of a new product range, we decided to put our cards on the table.

“We are wrestling with the semiconductor shortage, just like the rest of our industry. This has resulted in long lead-times and, in some cases, delayed deliveries.

“On top of this, we are preparing for our biggest introduction since 2016. In this situation, we decided it is fair to give potential customers a better basis for making decisions when considering their next Scania truck and its timing.”

The truck’s fuel consumption will be improved

While details are scarce, Scania is promising that the truck’s fuel consumption will be greatly improved.

There will also be chassis updates and the improvement should be seen, the firm says, with its trucks being a popular, economical choice.

Indeed, leading German trade magazines have named Scania’s trucks as their ‘Green Truck of the Year’ for five years for their running costs and their efficiencies.

Now, Scania customers can register their interest and order a truck from the updated product range.

However, the regular ordering system for Scania trucks will not be available until November.

Mr Vlaskamp added: “We will continue to educate our sales force during the autumn and make sure that we have all tools and information in place for the introduction of the new 13-litre range in November.

“We are convinced that our customers will appreciate that they are being given the opportunity to either go for a great truck from the current range or choose the substantially updated trucks that are scheduled for production start during the second quarter of 2022.”

Scania points to its introduction of a new powertrain as its way of showing its commitment to moving towards a sustainable transport system – which will be in accordance with the Paris agreement.

Scania was among the first heavy commercial vehicle makers to create a roadmap where their targets have been approved by the Science-Based Target Initiative.

James Armstrong takes control of Scania in the UK

He takes over the reins from Martin Hay and his job began on 1 July.

Mr Armstrong said: “My priorities will be to build on the solid foundation Scania has in the UK by further developing the range and scope of services we provide and continuing to enhance the skills and working lives of our team members.”