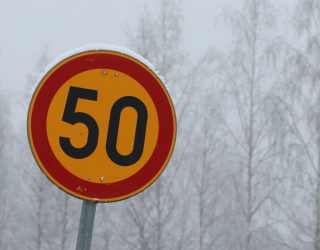 It seems that not all signs need to appear in the Highway Code before they make it onto UK roads.

A road sign that has been spotted on some of the UK’s routes has left some drivers scratching their heads about what it could mean.

The rectangular sign shows an image of a satellite sitting above a lorry (with a diagonal red line through it) placed on a blue background.

The image was recently shared on social media along with the comment: “This one wasn’t in the Highway Code when I took my test. Anyone any ideas?”

Plenty of people had a go at deciphering the sign, with suggestions ranging from potential alien invasion to a warning for HGV drivers.

Unsurprisingly, the latter is closer to the truth. The sign is warning HGV drivers not to follow their sat navs down country lanes. Rural roads can be extremely narrow, steep, and tight in places – making them unsuitable for larger vehicles such as lorries.

The signs are an effort to prevent HGV drivers from getting into difficulties further down the lane, potentially saving them time (and a considerable headache). Their use of images rather than text is also deliberate – designed to help drivers who do not understand English.

These signs were initially trialed near the Vale of Glamorgan in Wales back in 2007 as a way to reduce the number of HGV drivers getting stuck on small lanes.

Local residents had raised concerns about the number of HGV drivers getting stuck on lanes in the local area. Before the first signs went up, one particular road had been blocked three times over a number of months – including one Polish lorry driver who was stuck for more than three hours on a tight corner after following directions from his sat-nav.