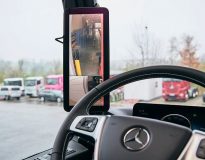 Mercedes Trucks has revealed that it has updated its MirrorCam for the first time. The second generation, available for the Actros and Arocs as well as eActros series since April, has evolved with the new system winning several Innovation Awards.  The head of product development at Mercedes Trucks, Prof Uwe Baake, said: “The intensive discussions with our customers and their experiences from day-to-day operations formed the foundations for us to make further adjustments.” The second MirrorCam generation stands The exterior of the second MirrorCam generation stands out because the camera arms on both sides have been shortened by ten centimetres.  This applies to both the narrower and wider cab and has the advantage, among other things, that drivers can reverse in a straight ...[Read More]