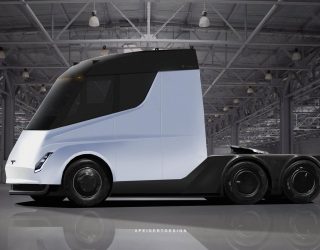 When Tesla announced its new all-electric semi truck in November, the big-name players in shipping and logistics were quick to take notice. Last month, the company extended reservations from North America to markets including the UK, Norway and the Netherlands – prompting even more excitement.

The launch event can only be described as a full-blown media frenzy. There was the trance soundtrack; the truck’s striking design (depending on the colour, it has been likened to anything from Darth Vader to a ghostly apparition); and its ability to do 0 to 60 mph in just five seconds (that’s two seconds less than a Porsche). I’m gutted I missed it (although I wasn’t actually invited).

This was Tesla’s way of saying: “We do things a bit differently around here”.

There’s good reason why Tesla wants to stand out from the crowd. It is competing with the likes of Daimler, Navistar, and Nikola Motor to make trucks that are big on technology and low (ideally zero) on emissions.

So what does the semi truck promise?

At the launch, Tesla’s co-founder and CEO Elon Musk claimed the truck could do 400 miles after just 30 minutes charging. Its low centre of gravity might not mean it handles like a Formula 1 car, but it could improve its high-speed stability. In its cab, the driver sits in the centre (that will take some getting used to), and there’s talk of self-driving capabilities.

Suffice to say, the Tesla Semi truck model is blowing people’s minds – and it looks set to leave its diesel counterparts for dust.

Are you excited about electric trucks? Let us know in the comments.