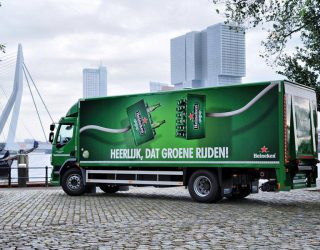 We recently wrote about Tesla’s all-new semi truck and the excitement it had created. But it’s not only Tesla, other companies are flexing their electric truck muscles too.

Earlier this month, global truck maker Navistar laid their cards on the table saying they plan to have more e-trucks on the road than Tesla by 2025. Now that’s fighting talk, if ever I heard it.

A closer look at the details reveals that Navistar has not published any official plans relating to this target, but why sweat the small stuff, right?

Navistar does want us to know that their medium e-trucks will travel short distances and recharge at the end of the day, and that its semi e-trucks will be able to travel 300 or 500 miles, carrying 80,000lbs on just one charge. It’s pretty impressive stuff.

Of course, Tesla and Navistar are not the only contenders. Daimler has released a short-haul e-truck currently used by UPS, and Cummins has announced its Class 7 electric truck.

The market is hotting up nicely. Consumer interest in electric cars is increasing, with sales predicted to reach 332,000 by 2026, according to figures from Navigant Research.

Dirty diesel trucks spew out CO2 (bad for global warming) and generate particulates and nitrogen oxides (bad for people). Electric trucks do none of the above (good for the environment). They’re better for drivers too, producing gobs of torque instantly meaning no more grinding through the gears to get up to speed.

I have to admit, I’m excited about e-trucks. Are you?