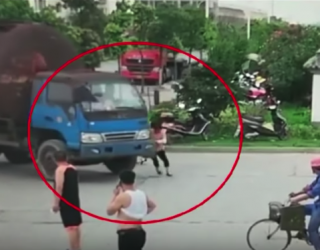 A woman has been caught on video blatently trying to scam a truck driver by making it look like he’d knocked her off her bicycle.

The video shows a woman carrying a bike while running alongside a truck on a street in the Chinese province of Anhui.

She then throws down her bike and positions herself in front of the truck’s front tyres. Check out the footage now.

The woman claimed to be seriously injured as a result of the ‘accident’. Luckily a passer-by had captured the incident on their phone and passed it to the police.

The three men watching make the situation even more hilarious.

On a more sombre note, without the footage the woman’s actions could have had a serious impact on the driver’s life.

Let’s hope she won’t be pulling that kind of stunt again.