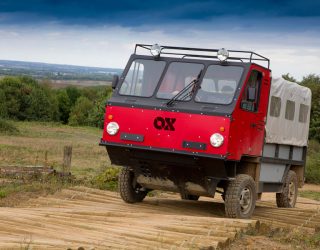 Flat-pack furniture is one thing, but a flat-pack truck…? It may have started out as an interesting idea, but it’s moving ever closer to a reality.

The world’s first flat-pack vehicle – also known as the Ox – has been designed to provide developing countries with affordable transportation.

It’s the brainchild of Global Vehicle Trust head and philanthropist Torquil Norman. Designed by Gordon Murray, the renowned engineer who helped created the McLaren F1, it has now been commissioned by oil company Shell.

The truck has a 2.2-litre diesel engine (usually found in a Ford Transit), seats 13 people and can carry up to 1,860kg of cargo. Small in comparison to some of the trucks we’re used to, but who knows what flat-pack vehicles we may see in the future.

A standard shipping container will be able to carry six Ox trucks at a time, making transportation more efficient compared to fully-assembled vehicles.

And according to the Ox website, ‘three trained (but not necessarily expert) people can put an Ox together in approximately 12 hours’ without the need for specialist tools.

Pre-production trials have been confirmed by Shell and prices have been estimated at around £10,000 and £15,000.

We might not be talking about 18-wheeler trucks, but I bet you’d be keen to assemble and drive one. I know I would…