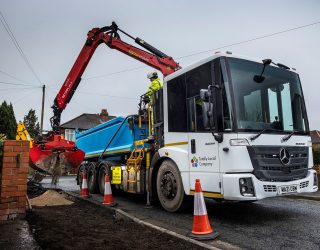 Totally Local Company Limited (TLC) had an exacting set of requirements for its latest trucks, and a pair of Mercedes Econics met or exceeded every one of them.

They are now hard at work on a range of construction projects for public and private sector clients.

TLC runs a range of heavy trucks and though these are its first Econic tippers, many of the company’s refuse collection vehicles are based on the same chassis and have proved both reliable and cost-effective to operate.

“But we also wanted low-entry cabs that would provide drivers with optimum visibility, and rear-steer axles to ensure the trucks were as manoeuvrable as possible, given that they would be working in an urban environment.”

He added: “Few vehicles are capable of meeting such a brief, and of the tenders we received the Econic was the clear winner.

“The field of view from the driver’s seat is excellent and the cab is easily accessed, while for such a large truck the tight turning circle is hugely impressive.

“Taken together, these and other attributes of the vehicle, coupled with the promise of eStar Truck & Van’s customer-focused back-up, added up to an unbeatable proposition.”

The Mercedes Econic has a deep, panoramic windscreen and low seating position that affords drivers an unrivalled view.

The bus-style folding nearside door specified by TLC is glazed to its full height and allows the driver to make direct eye contact with cyclists or pedestrians at junctions and in traffic.

Mr Burns said: “We undertake the vast majority of our work in the North West but the benefits encouraged by the Direct Vision Standard apply here every bit as much as they do in the capital.

“The quality of visibility from the cab is crucial to the safety not only of our own crews, but also of the public, and particularly vulnerable road users.

“Econic drivers can see so much more than is possible from a traditional, high-riding construction truck.”

Trucks are both 3235L ENA variants

The resulting, enhanced manoeuvrability compared to a standard 8×4 vehicle is a major advantage for operation on busy urban streets and at other locations where access is tight.

Fitted immediately behind each cab is a Palfinger Epsilon M135L crane with a maximum capacity of 1,500 kg and reach of up to 8.2 metres.