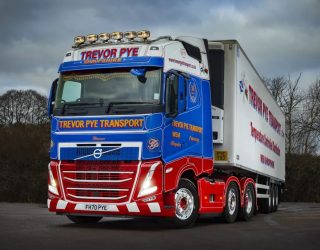 Trevor Pye Transport has put a stunning new Volvo FH 540 Globetrotter on the road, to mark 25 years’ service for one of its loyal drivers.

The Shropshire-based business has a long history with the Swedish manufacturer, but it hasn’t added any new Volvo trucks to the fleet for the past five years.

However, with their driver Chris Thomas being a huge Volvo fan, it was only going to be an FH for this celebratory order.

Supplied by Hartshorne Group, the 6×2 tractor unit is powered by Volvo’s D13K Euro-6 engine, producing 540 hp and an impressive 2,600 Nm of torque.

The striking blue and red livery has been traditionally hand-painted, giving the truck an authentic finished look.

The owner of Trevor Pye Transport, Trevor Pye, said: “We used to only run Volvos back in the day and we still have plenty in the fleet, including some older vintage models.

“They have always produced a quality product and when we decided to get something for Chris to celebrate his 25th anniversary, he was very clear in his choice!”

Mr Pye added: “His last truck was a 14-plate FH; he’s a Volvo man through and through.”

Latest version of the FH

Benefiting from a 12-speed I-Shift gearbox, Trevor Pye Transport specified its new truck with Volvo’s Long Haul Fuel package – that features I-See predictive cruise control for maximum fuel efficiency, the One Bed Resting package, plus the Media package with navigation, to ensure a premium onboard experience for the driver.

Working on the temperature-controlled distribution side of the business, the new FH – supplied via Volvo Financial Services – will be in operation five days a week and is expected to clock up in the region of 125,000 km per year.

The FH is a fleet addition

The truck has been named after Trevor’s granddaughter Florence and sporting a cherished registration plate originally purchased to mark Trevor’s 70th birthday, the FH is a fleet addition, taking the total amount of trucks the haulier has on the road to 15.

Mr Pye said: “All the trucks are named after members of the family, and this one is grandchild number four!

“Chris is very happy, to say the least.”

He added: “The Globetrotter cab is always a hit, and we know we can count on Volvo to deliver a reliable truck, which is exactly what we need in our line of work.”

Established in 1984 and based in the market town of Wem, Trevor Pye Transport is a family-run business.

Originally, much of the work involved the collection and distribution of cheese but it has broadened its range of services and today it transports a variety of goods – including fresh produce, groceries and seeds – throughout the UK.