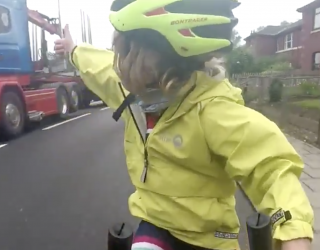 So often we see or share videos of awful driving around cyclists, so this textbook pass from an exceptionally patient & careful HGV driver for D&W Agri coming into Jedburgh deserves sharing, as does Rhoda’s response! They’re not on Twitter but we’ve thanked the haulier directly. pic.twitter.com/t46zQvfFoU

The footage shows a large D&W Agri timber lorry (apparently driven by Danny) giving a family of cyclists a wonderfully wide berth. It went viral not just because of Danny’s thoughtful driving, but also because of the brilliant thumbs up and thank you given by four-year-old Rhoda.

The video was captured on the helmet cam of Tom Jones, Rhoda’s father, while the family were on holiday in the Scottish Borders. Jones started recording the family’s cycling excursions after they experienced a string of intimidating passes by drivers.

Speaking about his daughter’s polite response to the BBC, Jones explained: “I told her, ‘that lorry driver has been really kind, make sure you say thank you.’”

The video was shared on the family’s Twitter account earlier this month and it wasn’t long before it had been viewed by thousands and shared on police accounts as an example of good behaviour on the road.

This kind of thing happens all the time, so let’s hope more footage like this goes viral soon…