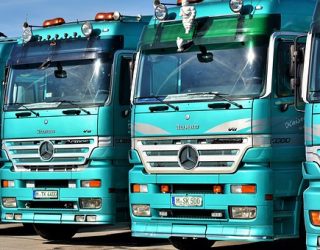 It’s tempting to think the grass is always greener on the other side. With this in mind, let’s compare trucking in Europe versus trucking in the United States.

In lots of ways the experience of driving a truck is the same wherever you are in the world. Life on the road has its highs and lows, and most truckers share similar experiences and memories.

However, there are a lot of differences too. Take pay, for example. Drivers in Europe can expect to earn around €28,000 a year – a figure significantly lower than that of their stateside counterparts, who can earn in the region of €36,000 a year for doing the same job.

Hmm… let’s see how working hours compare. The average working week for drivers in Europe is anything from 48 to 60 hours, but drivers are often expected to exceed those hours. In the US, meanwhile, drivers are prevented from working more than 60 hours across seven consecutive days.

It’s a similar story when we look at time away from home. Whereas six weeks on the road is considered a substantial amount of time for American drivers, in Europe for some drivers six weeks is only just getting into ‘long-haul’ territory.

This isn’t sounding entirely fair, is it?

Admittedly, road safety in the US is not as good as it is in Europe, so you could say the higher pay is justified. But I would argue that more uniformity in terms of pay and hours would do the industry a lot of good.

It might even solve the biggest problem blighting the industry: driver shortages. Just a thought…