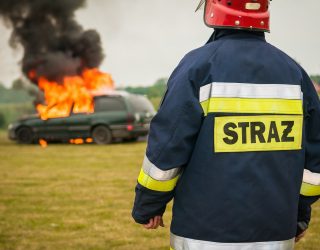 Luckily, it’s not something that happens often, but trucks can get into all sorts of scrapes.

A truck carrying barrels of cider in the UK caught fire recently and was ‘well alight’ by the time firefighters arrived at the scene. It took them about an hour to put out the fire and no one was injured. Mind you, a lot of cider was wasted.

Meanwhile, in the US a number of trucks ended up being swallowed up in Florida when the ground beneath them opened up. Several trucks fell victim to a sinkhole that is estimated to be at least 30-feet wide.

Finally, a classic truck predicament – hitting a bridge. Over to Ireland for this one. The driver of a truck carrying heavy machinery hit the underside of a railway bridge causing a JCB to fall into the street.