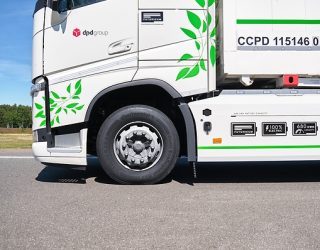 Prototype tyres for use on electric trucks are being put through their paces by Continental Tyres.

The tyre manufacturer says it is working with technology companies and vehicle makers to develop tyres to meet the special requirements of E-Trucks.

The firm has been testing the prototype tyres on an electric truck from Futuricum, a specialist in electric commercial vehicles.

The vehicle has been used since March by DPD Switzerland for regional work.

E-Truck has the largest truck battery

Based on the 19-tonne Volvo FH producing 680 HP, the E-Truck has the largest truck battery in Europe onboard.

Continental says that the battery gives the truck a freight-free range of 472 miles.

Hinnerk Kaiser, the head of tyre development at Continental, said: “The vehicle has been on the road in Swiss regional traffic since the beginning of the year and is currently rolling on tyres from the Continental EcoRegional product line.

The current testing scenario is aimed at boosting E-Truck tyre efficiencies even further by reducing rolling resistance and extending the tyres’ range.

Continental is using specially manufactured prototypes and comparing them with the performance of Conti EfficientPro.

The new tyres are currently being made by an ‘elaborate robot carving process’ and refined by experienced tyre carvers.

Mr Kaiser added: “As with all-electric drives, the tyres for the Futuricum Logistics 18E are exposed to higher torque during start off and acceleration.

‘Tyres must not only have a low rolling resistance’

“At the same time, the weight and weight distribution of the tractor are increased by the particularly powerful battery. Therefore, the tyres must not only have a low rolling resistance but must also withstand heavier loads than tyres for comparable vehicles with internal combustion engines.

“At the same time, they should last just as long and meet the same safety requirements as truck tyres for conventional drives.”

Continental Tyres also says there are issues with handling and braking performance that need to be resolved and that E-Trucks are more technically demanding on tyres.

Technology for E-Trucks is developing quickly

Now, they say that since the technology for E-Trucks is developing quickly, their engineers are in a race against time to develop tyres to meet this growing need.

They say that by using concept tyre development they will shorten significantly the development time needed for developing a new tyre.

During the development phase to create tyres specifically for E-Trucks, Continental says that the test truck will rack up at least 50,000 miles on the roads this year.

They say that the truck, when compared with a diesel-powered alternative, will save around 90kg of CO2 every 100 kilometres – that’s saving around 72 tons of CO2 every year.