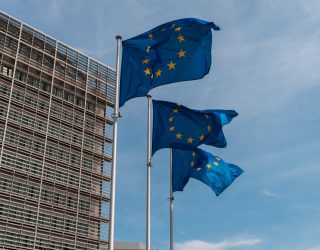 As the HGV driver shortage continues to create problems, 56% of hauliers in the UK say they are looking at moving their operations to the EU, a survey reveals.

The findings from Haulage Exchange of industry leaders found that transport firms are looking at resolving a range of post-Brexit issues, including the driver shortage, increasing administration and border delays. 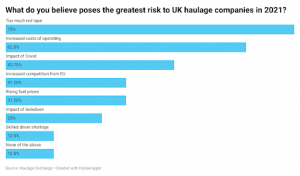 Of those questioned, 31% say they are avoiding working in the food and drinks industry because of increased administration and border checks on some products.

And 25% of haulage bosses say they are also avoiding livestock and agriculture, 19% are avoiding gardening supplies and 13% are having issues in retail.

According to the Road Haulage Association, there’s a skilled HGV driver deficit of 100,000 drivers because of Covid-19 and Brexit.

However, between March and May this year, the demand for haulage grew at more than twice the level it was the same period in 2019.

The return loads platform says that in April this year, demand was 120% higher than it was in April 2019.

The survey also reveals that 94% of haulage firms in the UK say they have been negatively impacted by Brexit – and are seeing greater aftershocks than they had anticipated.

‘Demand for haulage is stronger than ever’

The chief executive of Haulage Exchange, Lyall Cresswell, said: “It’s encouraging that demand for haulage is stronger than ever, and how well companies have adapted to big changes shows the resilience of our industry.

“We know more changes are coming, but this is an industry used to adapting and has proved extraordinarily successful in dealing with the unexpected.”

He added: “It’s clear that haulage companies will have to continue to be flexible, especially with further Brexit changes around the corner.

“Companies can use that demand to overcome the challenges ahead and I’m positive about the future of the industry. The issues identified in our survey need to be addressed quickly and decisively. If that happens, I’m confident that the industry will continue to thrive.”

Future for the haulage industry

UK hauliers were also asked what they believe the future looks like for the haulage industry.

Of those who responded, 31% say they are having to adapt their business model in a bid to survive. 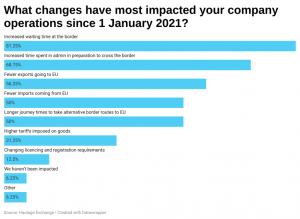 For 25%, they say they will not remain in business as it currently stands, and 18% are now planning for operations to be continued at a lower level than in the first quarter of this year.

Just 12% said that their company would increase operations after Brexit changes and 6% say they will continue operating but with lower margins.

Also, 6% of respondents said their company had not been impacted negatively by any Brexit changes.