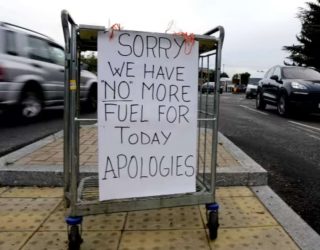 According to the UK prime minister, only 127 petrol tanker drivers from the European Union have applied for temporary visas to help fight the current fuel crisis. In contrast, over 300 temporary visas are offered to drivers overseas by the UK government.

Some military personnel have begun driving fuel tankers throughout the fuel crisis to contribute fuel resupply to petrol stations.

Has the fuel crisis improved?

The Petrol Retailers Association (PRA), representing almost 5,500 of the overall 8,000 filling stations in the UK, stated the worst-affected locations have seen a marginal improvement but still face a difficult time.

Unfortunately, last year, London and southeast England’s fifth forecourts were out of fuel.

“Whereas, places like Britain can be seen to have noticeable improvement with figures of 8% “,- stated the association.

Is there a limit on how much fuel I can purchase?

The UK government have the authority to restrict fuel quantities per driver and at what hour they can buy it. But, regardless of the situation, they haven’t used this so far.

Whereas, some fuel stations can be seen introducing a £30 cap on petrol a driver can purchase.

When did the fuel shortage begin?

On 23rd September 2021, the oil industry company BP warned to temporarily close a few of its petrol stations due to a lack of drivers.

Eventually, long queues were built outside the fuel stations around Great Britain due to a fear of running out of fuel.

Who is behind this fuel shortage?

Oil companies in the UK are stressing by saying there’s enough petrol available for vehicles. But, the initial problem is there are not enough drivers to resupply fuel to petrol stations.

To put it in perspective, an evaluated lack of more than 100,000 HGV drivers is already causing a problem for many retailers, from supermarkets to food supply chains.

Where the Fuel tanker drivers have to pass additional safety qualifications on top of their HGV licence for the transport of chemicals allowance, it creates another hassle for drivers.

What is the reason behind the fuel crisis?

There are several reasons to consider that the situation has hit across Europe; the UK has been specially considered to be dealing with the worst.

After Brexit, most European HGV drivers have returned to their homelands or moved elsewhere because of the impact on their income due to a borderline bureaucracy involved in the UK.

Meanwhile, fewer of them have retired, considering there has already been a massive backlog of fleet drivers in times of Covid.