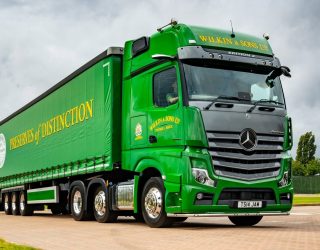 The UK’s first Mercedes Actros Edition 2 truck has been delivered to its customer – the world-renowned producer of Tiptree jam.

And the desirable tractor unit has been assigned to Tim Sharp, a driver who passed his Class 1 test less than a month before it arrived!

The Edition 2 represents a new dimension in comfort, safety and design – and just 400 are being built, with a dozen going to UK operators.

Wilkin & Sons’ latest flagship was supplied by Orwell Truck & Van and will be based at the operator’s main warehouse in Maldon, north Essex, which is five miles from its headquarters in Tiptree.

It carries the jam maker’s traditional green and gold livery, complete with the coat of arms the company is entitled to use as the holder of a Royal Warrant from Her Majesty The Queen.

However, the truck is easily identified as one of the most exclusive on the road, thanks to its Moonstone Grey grille and sun visor which incorporates four additional LED headlights, above which is a deep black panel with EDITION 2 lettering.

Highlights for the Actros Edition 2

Other external highlights for the Actros Edition 2 include an illuminated Mercedes three-pointed star in dark chrome with a black closed cover, gloss black trim, stainless steel entrance steps, three more LED headlights behind the cab, and – for tractor units – a chassis frame cover and will be driven by new driver Tim Sharp.

The Mercedes Edition 2s are being built as rigids as well as tractor units, in 4×2, 6×2 or 6×4 configurations, and with range-topping GigaSpace or BigSpace cabs.

Customers have chosen from 15.6- or 12.8-litre in-line six-cylinder engines with a combined total of eight outputs. Like its Edition 1 stablemate, the Wilkin & Sons’ Edition 2 has a GigaSpace cab and, at 530 hp, the most powerful of the 12.8-litre engines.

As well as the jams and marmalades for which it is best known, the company’s portfolio now includes everything from savouries, sauces and Christmas puddings to fruit-flavoured gins and teas.

Transport manager Kevin King said: “We’d been relying on two tractors for some time but decided to replace a 10-year-old 26-tonner with a third because we’re so busy, and because the loads we’re delivering, particularly to supermarket RDCs, keep getting bigger.”

“Both Actros are very exclusive and look amazing. It’s only just entered service, but we’ve had a lot of positive feedback already from people who’ve seen Tim’s Edition 2 out and about. We’re a high-profile company so image is very important to us.”

He added: “We were running Mercedes products when I joined this company 31 years ago, and we’ve remained loyal to the brand ever since. Mercedes trucks have always been reliable and cost-effective to operate, of course, but in recent years the manufacturer has really raised its game in terms of driver appeal too.

The Edition 2’s cab interior is every bit as eye-catching inside as its exterior where there’s an abundance of stitched black Nappa leather which contrasts with dashboard components in carbon.