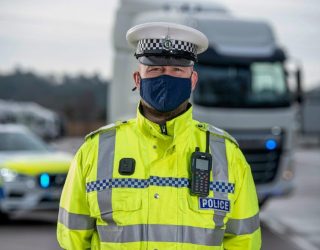 Police officers in North Yorkshire have been using an unmarked HGV to capture driving offenders on the roads.

The cab has been loaned to the police and is part of a road safety operation with Highways England who operate the country’s A-roads and motorways.

The national undertaking is codenamed ‘Operation Tramline’ and officers use the high-seated position to see drivers in vehicles for potential offences.

The police use the HGV to enforce the law on driver distractions, mobile phone use and lack of seatbelt use, along with other offences.

And over the five-day operation, the police say they dealt with 48 drivers and 51 offences.

Among them was an unrestrained three-year-old child in a car’s front seat, drivers using hand-held mobile phones and a van driver not wearing a seatbelt.

When an offence was spotted, officers in the HGV contacted colleagues in marked units who then pulled over the offending vehicle in a safe place.

Traffic constable Mark Patterson said: “Despite knowing the law and being aware of the dangers, it’s shocking that some motorists continue to take unnecessary and selfish risks by using mobile phones, not wearing a seatbelt and even not strapping children in, which is totally unacceptable.

“The truck cab lent to us by Highways England gives us an excellent vantage point to check everyone is driving safely and legally.

“Unfortunately, we see the consequences of distracted driving – horrendous injuries and fatalities just because someone couldn’t wait a few minutes to answer a call or check a text.”

‘Lorries are involved in collisions’

He added: “And if large vehicles such as lorries are involved in collisions, the impact is even more devastating and can absolutely crush smaller vehicles.

“So, we make no apologies for enforcing the law and keeping North Yorkshire’s roads safe for everyone who uses them.”

Sarah Watson-Quirk, the regional safety coordinator for Highways England, said: “We work very closely with our police partners across the country through Operation Tramline to improve driving behaviour and reduce the number of incidents caused by unsafe driving.

“It is always disappointing to see people flouting the law and putting themselves and others at risk, but even more so when children are involved.

“Using the supercabs we want to encourage all drivers to think twice about their behaviour behind the wheel, particularly those using a mobile phone as you are four times more likely to be in a crash while using one. Put the phone in the glovebox, concentrate on the road around you and make sure everyone gets to their destination safely.”

Operation Tramline is a national HGV road safety project and three plain white HGV tractor units have been loaned out to police forces by Highways England to help improve safety for drivers on the strategic road network in England.

Since the initiative began, police officers have stopped 9,674 vehicles resulting in 10,926 offences with 11,338 ‘interventions’ being dispensed.

The top three offences that officers detect are mobile phone use, seat belt offences and the driver not in proper control.