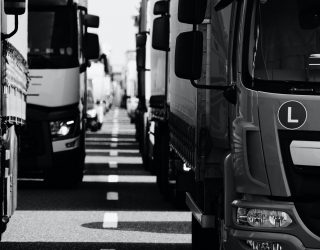 They visited the country’s largest driver training outfit to find that demand is growing among prospective drivers wanting to enjoy fast-growing salaries, plus bonuses as HGV drivers.

The firm, Hughes Driver Training, says that it is currently sending 100 trainees for HGV class I and class II testing every week.

Some of those include fast-track applicants that have been sent by haulage firms.

The managing director of the Leicestershire-based firm, Carl Hughes, said: “I think it is going through the roof.”

He said that demand for HGV driver training has grown since major employers including John Lewis, Amazon and Tesco began offering four-figure joining bonuses to their new drivers.

He added: “There are drivers I know that are working for companies and have been there for years, they’ve had two or three pay rises this year without even asking for it because it’s had to adjust to supply and demand.

Mr Hughes also told Sky News that with growing numbers of people wanting to train as HGV drivers, it will take time to fill the gap in the numbers needed to resolve the logistics crisis – and that the government should act by offering temporary working visas to drivers from the European Union.

He told the news channel: “We can train our way out of this crisis, there are really good opportunities for people who want to develop a career, but it will take time and we still need the temporary visas to get the drivers that hauliers need now.

“There are newly-qualified drivers who are on over £35,000 a year now at some companies and they’re getting a signing-on bonus as well. It’s really good for them.”

Training to become an HGV driver

The growing interest in training to become an HGV driver comes after several high street chains, including Nando’s, KFC and McDonald’s, said they had been forced to reduce menu items or even close their restaurants in recent weeks because of their supply issues.

Also, retailers and manufacturers are warning that there could be problems in the run-up to Christmas as the logistics crisis in the UK deepens.

The Road Haulage Association says that the country is short of around 100,000 HGV drivers and this is currently leading to a supply chain crisis.

In addition, around half of the drivers who are employed two years ago have left the industry with many blaming low wages and esteem and long working hours.

Following in the footsteps of Sky News, BBC News has also revealed that some HGV drivers have been enjoying a 40% pay rise in recent weeks.

One driver, Tom Reddy, says that he turned up for work one day to find he was being paid an extra £7 per hour – a 40% rise.

He says that the massive pay rise indicates that ‘something major is going on’.

The 36-year-old from Stratford said that drivers’ wages in the UK had been low for the last 20 years and had ‘not increased much’.

The news channel also spoke with Andy Barlow who drives for a firm in Worcestershire who has also enjoyed a big pay rise recently – with lots of people congratulating him on his Twitter account.

However, he warned that a driver’s wages account for up to 30% of a vehicle’s running costs and that prices in shops and restaurants will, inevitably, begin to rise.