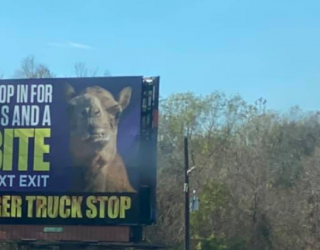 Long before the crazy world of Joe Exotic and Carole Baskin hit our screens, there was another tiger king at large in the US.

Michael Sandlin, owner of the Tiger Truck Stop in Louisiana, made tigers an added attraction. The most recent of those was Tony the Tiger, who arrived at the truck stop aged six months and attracted huge attention from both punters and animal rights activists.

When Tony died in 2017, Sandlin replaced him with Caspar the Camel. A far less controversial choice, you’d imagine. Until a woman climbed under the fence of Caspar’s enclosure to rescue her deaf dog and ended up biting Caspar on the balls.

I’m not even joking.

The woman had been screaming at Caspar (despite having let her dog run off its lead), so the camel sat on her. Which solved the problem, until she decided to sink her teeth into his nuts.

The Tiger Truck Stop was back in the spotlight, but Sandlin had had enough; it was time to sell up.

Since taking over, the new owners have removed all cages and enclosures, and sent Caspar to lead a quieter life in a zoo.

Which means the truck stop can get back to its main focus – looking after truck drivers.