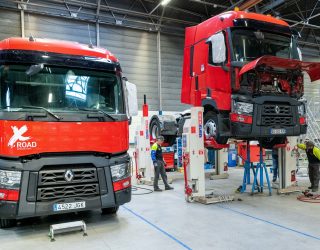 Renault Trucks has revealed that it has been investing heavily to put its used trucks offering at the centre of its business model to create a ‘circular economy’.

They say that the challenges linked to the decarbonisation and the growing interest from customers in this area have prompted the truck maker to invest heavily in the circular economy over the last four years.

The firm says it has two key ambitions: to guarantee the quality and durability of its trucks, and to reduce its carbon emissions.

Renault points out that the circular economy has significant growth potential and says that in 2021, the rate of regenerated or repurposed trucks rose to 6% of used trucks sold by the company.

The circular economy also cuts CO2 emissions by 14.4 tons for each reconditioned or recycled vehicle.

The French manufacturer says its used trucks are aimed at specific customers who, for economic, tactical or even environmental reasons, deliberately choose not to use a new vehicle.

These customers are also looking for immediate availability against a background of shortages.

The circular economy developed by Renault Trucks is based on three pillars:

Renault Trucks extends the life of its vehicles

These procedures enable Renault Trucks to extend the life of its vehicles by using both new and reconditioned parts – and this is a doubly sustainable approach since recycling contributes to both regeneration and repurposing operations.

In 2020, 7,500m2 of modern, spacious and functional premises were built at the Renault Trucks site in Saint-Priest. This new facility has enabled the truck maker to put regeneration at the heart of its used truck activity.

The semi-industrial process begins with a rigorous assessment of the used vehicle when it is returned directly to the manufacturer.

After that, the preparation phase begins, and the vehicle is screened at 200 checkpoints using the manufacturer’s tools.

The powertrain and the pollution control system are a particular point of focus.

Then preventive maintenance campaigns are also carried out, including the replacement of components such as the turbo compressor.

The truck’s software is then updated, which means that its fuel consumption performance can also be updated.

Renault Trucks has also set up a workshop in its Bourg-en-Bresse factory, specialising in the repurposing of used vehicles.

Special series such as the Renault Trucks T 01 Racing, or the T Robust 13L are produced in this plant.

Renault says that every year, 500 trucks are converted in their Used Trucks factory.