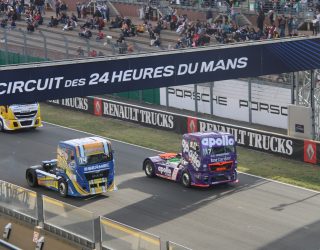 When the FIA ETRC (European Truck Racing Championship) announced this year’s championship would be postponed until the end of 2020, our hearts skipped a beat, as we were looking forward to seeing trucks fighting each other to reach the pole position. But all is not lost as a virtual truck racing championship is starting from this Sunday the 24th of May.

The virtual truck racing season will feature 8 events and is only open to full-season entrants of the FIA ETRC and will also see ETRC drivers who have been granted a special entry.The truck racing drivers that were supposed to race in the real-life event, will compete against each other in the already famous video game by Nintendo.

The virtual races will take place on Sundays with the first round being held on 24 May at the Hungaroring.

Each round will consist of two races which will be live-streamed with race 1 starting at 18.00 CET and race 2 starting at 19.00 CET. Rules and regulations are based on the real FIA ETRC and the virtual races will be monitored and supervised by an official clerk of the course, race control and officials, who all hold a DMSB license.

You will be able to watch the racing live as FIA ETRC will be broadcasting the race on their social media channel.

But keep an eye on the following races as something very interesting will be announced soon!