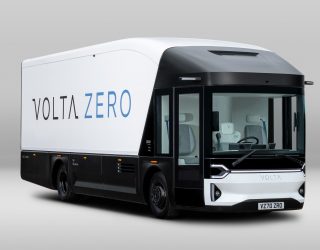 This is the new Volta Zero prototype chassis that has been unveiled by Volta Trucks with a unique design and which is being built at an industry-leading pace.

The running prototype chassis is using production specification components and has been designed and developed in just six months.

Volta Trucks says that the chassis offers a unique design with functionality to help build a sustainable truck while addressing the health and safety challenges that the truck and the driver will face in urban environments.

The truck maker has also revealed that the Volta Zero will begin production in December 2022.

The firm is a start-up electric commercial maker that is making the world’s first purpose-built fully-electric 16-tonne commercial truck.

The Volta Zero has been designed specifically for use in inner cities and the chassis is, the firm says ‘a major milestone’.

The prototype chassis has been built using the production specification frame as well as the drivetrain components that will make up the finished vehicle.

This sees a new high-voltage battery being installed and a compact eAxle.

eAxle is an integrated rear axle

Volta Trucks says that its eAxle is an integrated rear axle with a transmission unit and electric motor.

This will be the first commercial vehicle in Europe to use the innovative eAxle for increased efficiencies and boost the vehicle’s range.

Launched in September last year, the Volta Zero offers a range of sustainability objectives and has an innovative safety focus too.

It has already been received well by local authorities and potential customers for use in towns and cities.

The prototype chassis is able to be driven at normal road speeds and will begin a comprehensive testing programme on proving grounds shortly.

What the firm learns from this process will then be taken into the production of a Volta Zero pilot fleet that will be delivered later this year.

It’s this pilot fleet that will be tested and evaluated by engineers at Volta Trucks and also by key customers who have already signed up for testing and to buy the first trucks.

By signing up for a pilot, these customers will understand and appreciate how the new Volta Zero will be integrated into their operations.

Essa Al-Saleh, chief executive officer of Volta Trucks, said: “The reveal of our first running prototype Volta Zero chassis is a major milestone on our journey to producing the first customer-specification vehicles in around 18 months’ time.

“The prototype will provide our designers and engineers with feedback and real-world data on the vehicle performance.”

He added: “The learning from the prototype will also feed into the Pilot Fleet vehicles that will support our customer’s understanding of the electrification of their fleets. But this is also a great example of the nimble and agile culture and approach we have at Volta Trucks.

“While traditional vehicle manufacturers take years to undertake market assessments, design processes and vehicle development, at Volta Trucks, we work at speed because we know that the world’s climate emergency cannot wait, and our customers need vehicles now.

“In six months, we have designed and developed a running prototype chassis and 18 months from now, we will be building series production vehicles for our customers. This is what they need, this is the speed they need us to work at, and this is what we’ll deliver.”