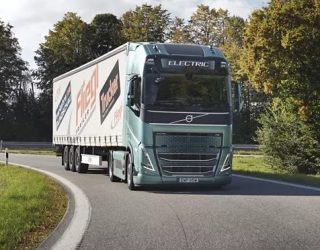 The electric truck exceeded its official range and used 50% less energy than its diesel counterpart in the test.

Testers found the electric drivetrain was very efficient and will make the all-electric truck a powerful tool for reducing CO2 emissions.

The Volvo FH Electric that was tested is a zero-exhaust emission vehicle with 490kW of continuous power and a gross combination weight of 40 tonnes.

Tested on the Green Truck Route

The electric truck was tested on the Green Truck Route, a 343km long route that includes a variety of motorways, hilly terrains and tighter roads that is used for testing different manufacturers’ trucks in a wide range of conditions.

The test was carried out by trucking journalist Jan Burgdorf, who said: “I have to say when driving this truck, it is as agile, or even more agile, than a diesel truck.

“Drivers will be very surprised about how easy it is to drive; how quiet it is and how well it responds. There are no vibrations whatsoever.”

The FH Electric kept an average speed of 80 km/h (50mph) over the whole route, which was on par with the diesel-powered Volvo FH with the fuel efficiency package I-Save.

Based on the energy consumption of only 1.1 kWh/km, Volvo’s electric truck had a total range of 345 km (214 miles) on one charge.

The test director at Volvo Trucks, Tobias Bergman, said: “These test results show that it is possible to drive up to 500 km (311 miles) during a regular work-day, with a short stop for charging, for example during lunchtime.

In the Green Truck Route tests, the Volvo FH Electric used 50% less energy than a Volvo FH with a comparable diesel engine.

Volvo Trucks says its goal is for electric vehicles to account for half of its truck sales in 2030.

Mr Bergman explained: “We are committed to the Paris Agreement on climate change.

“Science-based targets have been set and we are taking action to fast-forward the development to dramatically lower CO2 emissions related to on-road freight transports.

“I believe that the broad electric range we already have on the market is very clear proof of that.”

Volvo’s range of electric trucks consists of six all-electric vehicles that have been designed to cover many different transport assignments.

The Volvo FH, FM and FMX Electric models have a GCW of up to 44 tonnes with sales beginning in Europe and production is set to start in the second half of 2022.