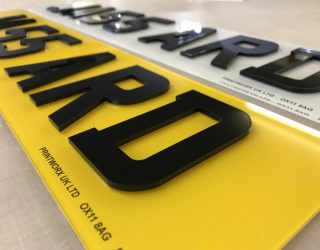 Here’s everything you need to know about 4D number plates, including whether they are legal or not? Let’s find out.

Having a good pair of number plates is a mandatory requirement to drive your vehicle legally on the road. Many fleet enthusiasts bid on a personalized registration number to acquire their taste, & many of them are following the trend of fitting ‘4D’ number plates.

What are 4D number plates?

This rapidly increasing trend features a standard plate with raised numbers & lettering that stand slightly higher from the background of the plate. Even though addressing the popularity of 4D number plates, we can see certain instances on social media where authorities have reported stopping such fleets with 4d number plates. Such incidents have led drivers to question the fundamental rules for number plates while operating on roads.

What are the ideal rules for number plates?

In the UK, number plates must follow the below measures set for the fleet operators by Driver & Vehicle Licencing Agency (DVLA).

There are also strict rules governing the size and shape of the letters on a number plate. These must be printed in Charles Wright font, with characters 79mm in height, 50mm in width, and with a space between them of 11mm.

The shape and size of letters on the number plates in the UK strictly governs the following laws:

According to DVLA, additionally, a nationally identified strip on the left-hand side of your number plate is the freedom of choice for drivers to have fitted what is described as ‘3D’ characters.

Despite DVLA’s proclamation for raising the letters on number plates, fitting 4D number plates is still quite resistant in reality.

Sergeant Dan Pascoe, Surrey Road Police Unit, explains, Even though there is no law against fitting a 4D number plate, the letterings and characters themselves are never intended to distort any registration from being legible from other angles obscurely.

The issues with ‘4D’ number plates are commonly misplaced characters or not structured accordingly on the raised area & instead stuck on with adhesive. Such impetuous placements actually fall off over time, leaving the driver with a worn out and therefore ‘Illegal’ 4D number plate. According to GOV.UK, displaying illegal number plates are charged up to £1,000 and the vehicle will fail its Ministery of Transport (MOT) test if your number plate is incorrectly displayed. You can also opt for some saucy number plates that are more suitable to your fleet’s character & will definitely be a centre of attention for lorry spotters out there!

We advise the drivers to stay on the safe side and keep the vehicle stock with customary 2D number plates.