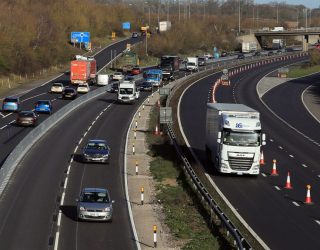 The article below will give you a thorough understanding of what is a contraflow system and where are they used in the UK.

Reading this will help you clue up for your theory test, and you can confidently approach contraflow bus and cycle lanes and contraflow systems on motorways after passing the theory test.

What is a Contraflow System?

Explained simply, a contraflow system is described as a momentary arrangement where traffic flows in the opposite direction against the typical and is most commonly utilised on motorways. Regardless of the given developments in traffic management, the word contraflow has evolved to a wide range, such as a permanent fixation for buses and vehicles in a busy area, and no longer only refers to temporary traffic layouts.

Please do not skip this article as you might need to be thoroughly familiar with the contraflow system signs as you might be asked to interpret it in your driving theory practice test, so considering its different variations, your revision should be thorough.

Contraflow System on a Motorway

Temporary contraflow systems can be usually found on motorways. When in need of repairs, roadworks happening, or even in case of a significant accident requiring to close one side of the motorway, a contraflow system can be opted in such cases to reduce disturbance to drivers.

While a contraflow is on a motorway, traffic can be diverted to the other end of the motorway to keep the flow running, usually marked by traffic cones to represent lane markings and separate the traffic flow.

Some crucial driving practices need to be implemented when you encounter a contraflow system on motorways. In this case, traffic cones are likely to be your temporary barriers while the ongoing traffic, thus, making the lanes narrower. Therefore, getting into the right lane at the right time and staying throughout the contraflow while keeping a safe distance is vital.

A Contraflow bus lane can be seen on a one-way street, with the bus lane taking an opposite direction. A blue road sign is assigned to indicate a contraflow bus lane, so memorising the sign is suggested as you might be asked to identify it in your theory test.

Contraflow cycle lanes on the other hand, are constructed to increase cyclists’ safety by helping them avoid occupied roads and junctions. A separate cycle lane is offered to meet the goal, allowing cyclists to travel in both directions.

As a fleet driver, it is essential to know these lanes and understand the potential hazards and the possibility of encountering cyclists travelling nearby.

Make sure of blue road signs when a contraflow cycle lane is in use, and keep a fair amount of distance between you and the cyclists.

A contraflow system can sometimes be disorientating so being fully prepared for such scenarios is necessary for either preparing for your theory test or driving confidently on the open road.

With these different types of contraflow systems, getting a grip on all three can be done by carefully revising and studying the traffic flow techniques.