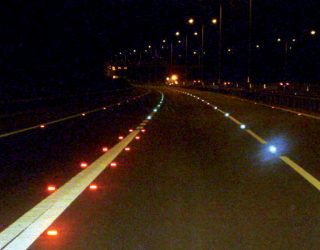 To be safe while driving on the motorway after sunset or during a low visibility ratio, the roads are equipped with reflective studs to assist the driver in identifying and staying on the right lane till you drive off the motorway when needed.

Also called cat’s eyes, probably because they look like a pair of cat’s eyes looking at you from a distance, these reflective motorway studs come in a variety of colours indicating, each with a different meaning to help the driver reach their destination.

There are usually five types of reflective studs Red, Green, White, Fluorescent Yellow and Amber. Each stud has their own meaning to remember and drive confidently next time.

If you remember your theory test, you might remember the question: what colour are reflective motorway studs and their slip road? The answer is Green reflective studs. Whenever there’s a slip road, on or off the motorway, the studs are green to signify these junctions in case of poor visibility.

White reflective studs are positioned right between the motorway to help drivers keep in the lane. By reflecting the light from the headlights back to drivers while driving, one can distinguish the two divided lanes in case the driver is caught in heavy rainfall or driving late at night.

When it comes to green and yellow fluorescent studs on the motorway, they can easily catch you off guard on your driving theory test, as these colours are pretty uncommon for drivers. The purpose of having those is to signify drivers of any road works or hazards further on the motorway. Green and yellow fluorescent studs carry out these potential adjustments in the UK.

Now, as we know which studs hold which meaning, if it’s still hard to remember the location of each reflective stud, you can draw a simple layout of the motorway and indicate each stud with a coloured pen.

You can also use a keyword associated with the stud as an instant reference to help differentiate between all the colours. Happy memorising, and we wish you all the best for your test!