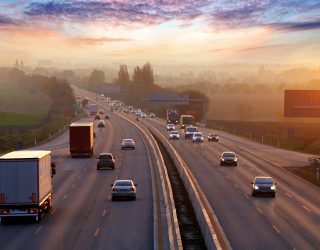 You can find several different kinds of roads in the UK, where you might recognize a few of them, but it’s highly likely you’ll find a few you haven’t heard about. In this article, we will be explaining the types of roads in the United Kingdom and for what reasons they surfaced.

Whether you just became an HGV driver or driving on the UK roads for the first time, having a general understanding can make a big difference. Knowing them can help you differentiate between those and will assist you in confident navigation.

Considerably, these roads are categorized into three different types. Respectively:

What are the Different Types of Roads in the UK?

A-roads are categorized as ‘major’ roads to link all regional towns to the cities. Sometimes referred to as ‘trunk’ roads, they can be either single or dual-carriageways. Spread across both rural and urban zones, they are ranged more than 28,000 miles in the UK, serving a remarkable necessity to millions of British citizens.

The B & C roads are referred to as ‘minor‘ roads in the United Kingdom. Still, the fact they are spread more miles than the A-roads is because they connect across all the small towns and villages together, covering up over 87% of the total road length of the UK! unsurprisingly, the road maintenance is spiked for these roads because of the sheer number or connectivity.

Motorways are a connection of roads where speed limits are quite high as usual to allow movement of vehicles between big towns and cities. Currently, there are 2,173 miles of motorways in the UK transiting the size and breadth of the country to serve convenient cross-country travel.

With more than 320 Motorways in total, only three can be found to be called the longest motorways in the UK.

When encountering a Sealed road, it means the road contains a surface dressing. In contrast to Unsealed roads, the surface treatment is not given to lock-in. Sealing the road not only makes it easier to navigate but also makes driving safe. These surface treatments secure the entirety and avert the ingress of water, preventing the roads & pavements from getting damaged or forming potholes.

Sealed roads are also referred to as Motorways, required to drive at high speeds of over 70mph while keeping the vehicle and the driver secure. Sealing high-use & high-speed roads reduce the need for emergency repairs while being the toughest and most durable all the time.

If you have any other questions regarding the roads in the UK, do check the British roads FAQs to understand further.