Drink driving is the cause of thousands of serious injuries and deaths on UK roads each year. Everyone knows that drink driving is a no-go, but it still happens. Is that because there’s confusion over the UK’s drink-drive limits?

If so, we’re on hand to help. Here’s everything you need to know about the UK alcohol limit and the laws on drinking and driving.

What are the UK’s drink-drive limits?

Depending on where you are in the UK’s drink-drive limits will be different.

In Scotland, those figures are 50mg, 22mcg and 67mg for blood, breath and urine, respectively. Having just one drink in Scotland will put you over the legal drink driving limit.

What affects the drink driving limit?

Alcohol affects different people in different ways. The extent to which one person is affected depends on how much alcohol is absorbed into the blood and:

What are the penalties for drink driving in the UK?

Being caught driving over the Uk’s drink drive limits can result in an instant driving ban, £2,500 fine and a spell in prison. Exactly what penalty you receive is up to the magistrate on the day.

If you’re caught driving over the limit and involved in a fatal accident, you could find yourself behind bars for 14 years.

What do you think? Are the penalties for drink driving strong enough? 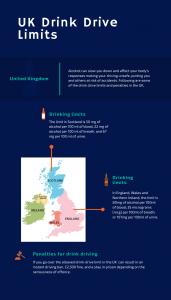 How many units of alcohol is too much?

Because there are so many factors that determine a person’s legal drink-drive limit in the UK (or anywhere), it’s impossible to put into a single figure how many units of alcohol is too much.

However, generally speaking, if you were to drink two pints of regular-strength lager or two small glasses of wine, you are more than likely going to be over the limit.

A pint of regular lager takes two hours to leave your system, a large glass of wine takes four hours, and a single shot of spirit takes one hour. You also need to take into account the hour it takes for the alcohol to enter your bloodstream.

So for example, if you had two large glasses of wine and stopped drinking at midnight, you would have to wait until 9 am until you could get behind the wheel. However, it’s important to remember that it could take even longer so don’t get caught out thinking you can calculate your own drink driving limit.

According to past research into drink diving in commercial transport in Europe, truck accidents caused by drink driving are rare. Which is good news for the trucking industry.

There are always going to be some lorry drivers who don’t follow drinking driving rules or ignore the UK drink driving limits – and the media will be quick to pick up on those cases.

But we know the majority of HGV drivers are experienced, responsible drivers who wouldn’t dream of drinking a drop of alcohol before getting behind the wheel. It’s just not worth it…