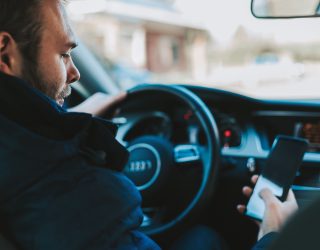 There’s no end of distractions for anyone trying to drive a truck safely. Mobiles, GPSs, lane-change warnings – they can all take a driver’s attention away from the road.

You’ll be well aware of the dangers of distraction, but did you know the action of being distracted by these gadgets has a name? It’s known as inattentional blindness – a phenomenon that’s been around since 1992. The simple definition of inattentional blindness is when you focus on something while driving that means even if you’re starting straight at something ahead of you, the brain struggles to ‘see’ it or register it is there.

Researchers have given an example of inattentional blindness. You can picture the scene: a truck driver is sitting at traffic lights waiting to turn. He can see a motorbike is ahead of him, but even so almost hits it. The reason? Inattentional blindness blots out the motorbike’s presence in favour of focusing on making the turn safely. It seems our brains are not wired to process every bit of stimulus and our senses are compromised as a result. If this wasn’t the case, we would be constantly overwhelmed by information and unable to perform at all. The irony is that many of today’s gadgets and in-truck tech are designed to create a higher level of safety, yet can often have the opposite effect.Add to that the hypnotic effect of white-line fever (when the monotony of driving for long periods on dull motorways causes the driver to become inattentive or more easily distracted) and you can see why we’ve got a problem.

Unfortunately for motorcyclists, they seem to be on the receiving end of inattentional blindness. This is because they do not rank highly on the brain’s priority list when it is filtering information. Some drivers will look towards an oncoming bike – even directly at it – yet still pull out because the bike has been rendered ‘invisible’.

Fortunately, there are ways to counteract inattentive driving. As well as the obvious things like not answering the phone when behind the wheel, taking regular breaks, and receiving proper mapping and route planning training, there’s also mindful driving and developing a more attentive mindset.
This involves focusing on how you’re feeling mentally and physically, taking things much slower and breathing a little deeper. Admittedly, mindful driving is not going to appeal to everyone, but most of us will probably do it to some extent anyway.

Have you experienced inattentional blindness when on the road? If so, you’re not alone. Let us know what you do to keep yourself alert on long-distance jobs.